Desus Nice (Daniel Baker) and the Kid Mero (Joel Martinez) of "Desus & Mero" are going their separate ways, with the Showtime show confirming the news on July 18.

"Bodega Hive: The illustrious @desusnice and @THEKIDMERO will be pursuing separate creative endeavors moving forward. #DESUSandMERO will not be returning to SHOWTIME. It's been a good run, fam," the show tweeted.

Since the announcement, reporting from Matthew Belloni of The Puck has uncovered that the duo split due to differing views on their longtime manager Victor Lopez.

In their wake, the comedy team leaves behind a library of content, including a podcast titled, "Bodega Boys," which stopped releasing new episodes in November, a Viceland show and four seasons of their Showtime project. 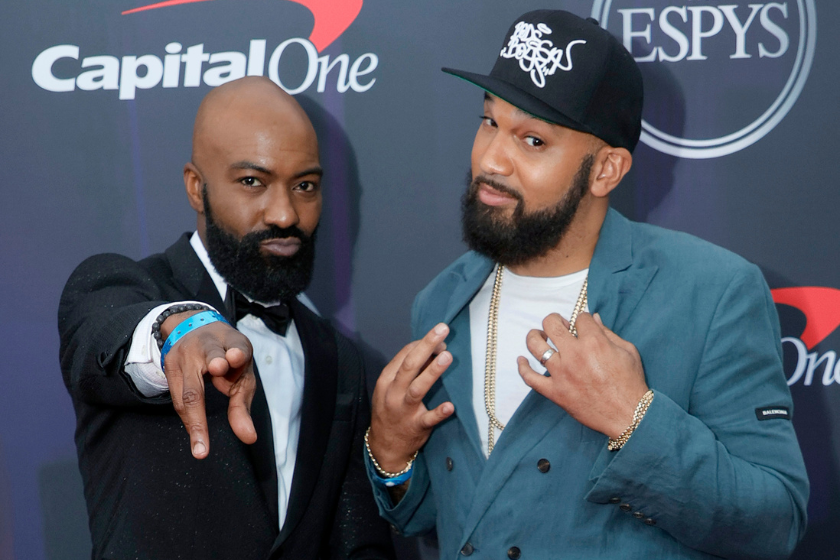 At the intersection of culture, sports and politics, the Bronx-born hosts often offered their hot takes on all things New York sports as diehard Yankees and Knicks fans, making their interviews with sports figures some of Desus & Mero's most entertaining of the series.

As fans mourn the fracture of the Bodega Hive and the end of an era, followers have begun to circulate Desus Nice and the Kid Mero's most compelling moments as an ode to the two and their show. So here are our selections for the best Desus & Mero interviews with athletes.

Former New York Knick Carmelo Anthony made an appearance on Desus and Mero's Showtime series in 2019, with the NBA veteran sharing stories from his time playing at Madison Square Garden, and what it's been like returning to the city as a visitor.

The New York native even gave his insights as the "king" of social media clap backs. "It's just a mood," Anthony said of his process, "I usually don't go in the comments."

Megan Rapinoe strolled onto Desus and Mero's Showtime set fresh off a 2019 World Cup victory making her appearance on the show one for the history books. Greeted with a "U.S.A." chant from both hosts, the interview was off to the patriotic from the jump.

From her feud with then President Donald Trump to her refusal to visit the White House to her decision to kneel, Rapinoe didn't shy away from any topic.

The Golden Boot winner also opened up about her World Cup run, sharing with Desus and Mero what it was like to defeat France in front of a raucous French crowd.

Lewis Hamilton sat down with Desus and Mero at Studio 368 in New York City for a refreshingly earnest conversation.

Speaking about his journey to Formula 1 and the importance of diversifying the sport, Hamilton shared his work investing in changing motorsport.

Hamilton also touched on his burgeoning rivalry with Max Verstappen, which was at its height during his appearance as the two were fighting for the drivers championship in 2021. The palpable competitiveness between the drivers has continued to ignite and divide the F1 fanbase, well after the championship battle.

After the interview, in a chaotic and entertaining turn of events, Desus and Mero joined Hamilton in the driving simulator game, which featured crashes, trash talk and (naturally) jokes.

Rarely is it enjoyable to revisit content from 2020's COVID-19 quarantine, but WNBA legend Sue Bird's spot on Desus and Mero may just be the exception. The Seattle Storm star stopped by the show via Zoom while competing in the WNBA's Wubble campaign, an accelerated season put on in total isolation.

With Bird a friend of the show, the trio's chemistry transcended the digital divide, setting their sit down apart from the typical stale Zoom interview.

The chat touched on a range of topics, but the conversation always found its way back to the Nike Dior 1 sneaker, a shoe Bird had, and that Mero was eager to get his hands on. The cherry on top to the interview was a Megan Rapinoe, Bird's fiancee, late Zoom cameo.

CC Sabathia, the former Yankees star pitcher, was a regular on Desus and Mero, dating back to the duo's Viceland days. The World Series champion stopped by during his playing days, confirming the rumors that he wears basketball shorts under his pants due to superstition, while also revealing his favorite hitter to strike out as Miguel Cabrera. In his series of Viceland appearances, Sabathia unearthed clubhouse secrets, dugout snacks and lineup insights.

Sabathia returned to Desus and Mero's Showtime iteration of the show, joining the hosts for a field report from a Bronx handball court. His appearance on the show as a handball official was brief but memorable, predicting his now well-documented fitness journey.

It's fitting that Desus and Mero's last released interview was with Yankee icon Derek Jeter, given the hosts vocal admiration for the New York team.

"We've grown up watching you," Desus told Jeter. "You've given us some of the greatest moments we've seen as a Yankee. You had us in the old stadium rocking."

Reminiscing about some of Jeter's most iconic moments as a Yankee, Desus and Mero peppered the famed captain with questions about his New York tenure. In an honest moment, Jeter revealed what he actually discussed with his opponents at first base, and spoiler alert: it usually had to do with where and what the players were doing the night before.