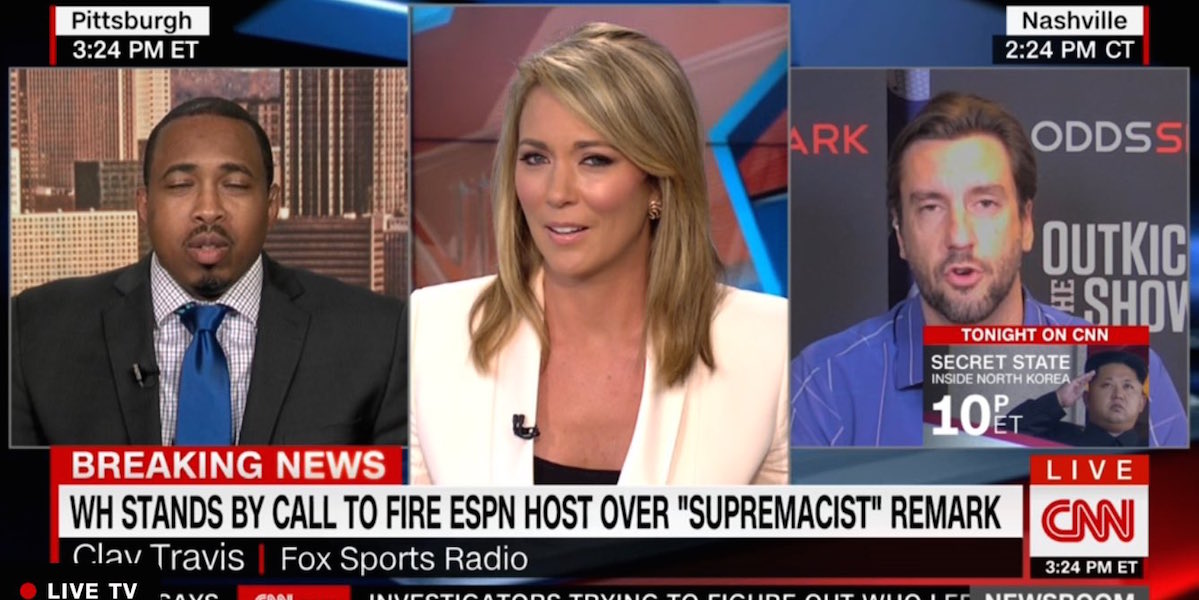 Travis, who describes himself as a “middle of the road moderate” despite having made a reputation of his criticism of ESPN — or as he describes it “MSESPN’s” — alleged “liberal bias,” was once again critical of the company’s decision to keep anchor Jemele Hill employed after she tweeted criticism of Donald Trump, calling the president a “white supremacist.”

Of course, Travis, 38, was as mature and respectful as you’d assume he’d be in this situation. During his appearance, the analyst said the only two things he completely believes in are “the first amendment and boobs.”

Because of course this moron @ClayTravis would say something like "he loves the first amendment and boobs." Yes, boobs. He would on CNN pic.twitter.com/bpjKRgHGj7

Of course, this made everyone else on the panel extremely uncomfortable, including Baldwin who pointed out the disrespect of the comment directed at a female host.

Naturally, Travis, who has gained a reputation for his trolling persona, was extremely pleased with his performance on national television, tweeting about it to his fans.

Just went on @cnn and said I only believe in two things completely, the first amendment and boobs and the host lost it. Need video now.

He also continued to troll Baldwin shortly after she tweeted about the incident.

That was… I just… it was one of those thought bubbles "did he actually say that on MY SHOW?!" Note to men — that is never okay. #smh

You can't say you like the first amendment and boobs? I say and write it every day. Need to make tshirts now. https://t.co/wRGpzDEKjJ

Not sure what CNN expected booking Travis on the show or if he was even on their radar before this week, but this incident shouldn’t surprise anyone in any way. Without outlandish comments, Travis would only be known by listeners of Nashville sports radio.

But apparently that helped get some attention on the show because, according to Travis, he’s been invited back to appear on CNN next week.

CNN is so offended that they already called me and asked if I could come back on Monday. Too perfect.

Maybe CNN is actually in on the act? Who knows.