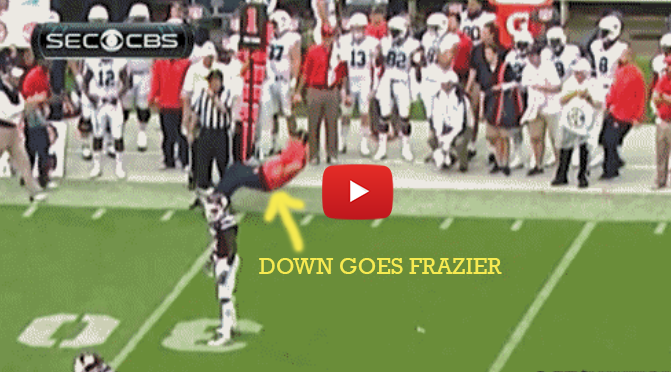 Week 7 of the college football season featured plenty of great games, but also brought with it a number of follies. Here are the worst of the worst from Saturday:

There was a torrential downpour late in the first half of Mississippi State’s win over Auburn. This made the field very slippery as Auburn’s offensive coordinator Rhett Lashlee found out the hard way while racing to the official in an effort to make a timeout call. Lashlee loses his footing and wipes out underneath the ref, almost taking the ref out (Auburn did get the timeout as Gus Malzahn calmly walked to the ref to make the call).

LSU safety Jamal Adams was jawing with Florida receiver Andre Debose out of bounds when Debose had enough and gently pushed Adams facemask. Adams took the chance to embellish and try to get a flag, so he goes down like he got hit by a Floyd Mayweather hook.

Arizona’s kicker also did his best to draw a penalty with an awful flop. Casey Skowron shanked a 36-yard kick wide right that would have won the game and kept the Wildcats undefeated. He knew he’d missed it as soon as he kicked it so he leaned into the diving USC players on the block team and goes down like he got shot in the leg. He was not rewarded with the flag and Arizona lost by two (but got that cover!).

UCLA head coach Jim Mora and defensive coordinator Jeff Ulbrich got into it on the sidelines during the Bruins 42-30 loss to Oregon. I think my favorite part is Mora attempting to calm Ulbrich down by caressing his face.

Speaking of angry coaches, no one does it quite like Nick Saban.

Worst Fake Punt of the Week:

Seemingly every week some team tries a fake punt and fails miserably. This week it was Mississippi State that went for a fake deep in their own territory. Auburn wasn’t fooled and it resulted in an interception on an awful throw by the Bulldogs punter.

Signs of the Week:

This one isn’t really a fail, but deserves to be shown somewhere so we’re going to put it here.

Strong candidate for sign(s) of the day. We are all Chubby girls today. #FreeGurley pic.twitter.com/9KgASg1g3m

A pair of UGA fans made the trek to Columbia, MO and brought these two great signs noting RB Todd Gurley’s suspension and his replacement, freshman RB Nick Chubb.