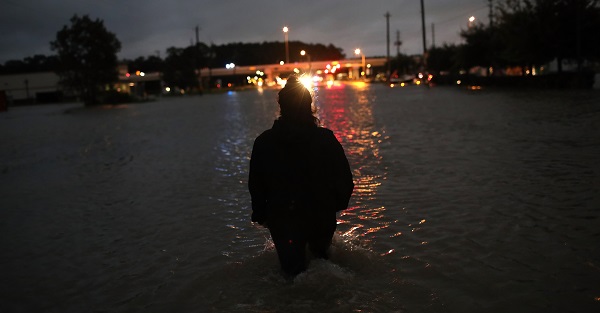 Win McNamee/Getty Images
HOUSTON, TX - AUGUST 29: A Houston resident walks through waist deep water while evacuating her home after severe flooding following Hurricane Harvey in north Houston August 29, 2017 in Houston, Texas. Harvey, which made landfall north of Corpus Christi late Friday evening, is expected to dump upwards of 40 inches of rain over the next couple of days. (Photo by Win McNamee/Getty Images)

Hurricane Harvey has produced many tragedies and the fallout from the devastating storm will continue for months and, potentially, years. With that said, there are many individual stories of heroism and one such story is that of former Texas high school football coach Ruben Jordan, who reportedly attempted to rescue people in the line of the storm this week.

Tragically, his family released a statement indicating that Jordan, who coached in the state at Clear Creek High School for more than 20 years, has passed away. (h/t SEC Country)

“With heavy hearts, we would like to announce to all of our FB friends and family that the passing of Ruben C. Jordan (Coach Jordan) has been confirmed by the Friendswood Police Department. Our family would like to extend our sincere appreciation and thanks for the effort, support and prayers we received while trying to locate him. At this time we ask for your continued support, prayers and respect as we grieve and work towards making arrangements to lay him to rest. Words can?t begin to explain how grateful we are to be a part of such a strong, supportive and loving network of friends and family. We?ll be sure to keep everyone informed once arrangements have been made and finalize.”

This is absolutely brutal on a number of levels and the reaction from the community has been swift in the wake of the news. Jordan’s decision to act in the moment is exceedingly admirable and he will be remembered fondly.

Our thoughts and prayers are with all those affected by both the storm and his tragic loss.