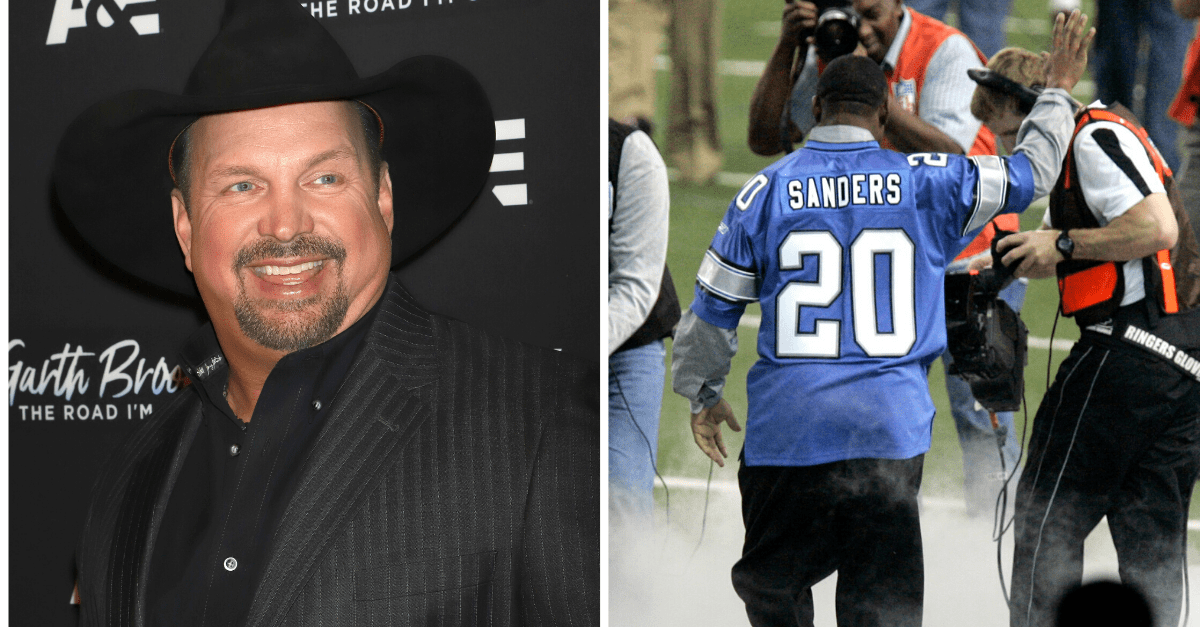 Garth Brooks is one of the most well-known country music stars in the genre’s history. With more than 170 million records sold, the 58-year-old is one of the world’s best-selling artists of all time. He’s sold more units than Elvis Presley and Michael Jackson and continues to sell out stadiums.

The two-time Grammy Award winner and 17-time American Music Award winner who will forever be known for his “Friends in Low Places” hit single is also known for his progressive views and uniting messages in his songs. The New Yorker even called the man who turned down playing at President Donald Trump’s inauguration “country music’s square, liberal dad.”

So when Brooks’ fan base, likely more conservative than liberal, came across a photo on Garth Brooks’ Instagram of him wearing a “SANDERS 20” jersey after playing a show in front of 70,000 fans last weekend at Ford Field in Detroit, they blasted him for supporting Bernie Sanders in the 2020 presidential election. Sanders is currently seeking the Democratic Party nomination.

Detroit You carried me all night long But you always have I’m in love with you! love, g #GARTHinDETROIT

Garth Brooks, however, was not wearing a Bernie Sanders jersey. That would be a Barry Sanders jersey, which makes a lot more sense considering:

1) Barry Sanders is one of the greatest players in NFL history and the greatest running back in Detroit Lions history, and Brooks was playing in Detroit, Michigan.

2) Barry Sanders was an all-time legend at Oklahoma State University, the same school Brooks competed on the track and field team and graduated from.

Still, that didn’t stop Garth Brooks fans from jumping to conclusions on social media. One fan even called the country music star a “big freaking liberal socialist” and asked to keep his politics and entertainment separate.

Here are just a few of those commenters’ responses:

“Can’t you just do what you get paid to do ???? Why why why does it have to involve politics !!! So sad. We don’t pay good money for anything other than to watch you perform. Thought you were different,” another responded.

“Weird. That a millionaire would like a socialist. Hey Garth are you going to distribute your millions?” asked one fan.

“If that’s Bernie shirt I just lost a lot of respect for you!” another commented.

Facebook forgot who Barry Sanders is and is freaking out at Garth Brooks for wearing a jersey and I’m dying. pic.twitter.com/wVfAKU7Cn1

Good grief, people. I know it’s election season and Bernie Sanders is among the many democratic candidates seeking his party’s nomination, but not everything is a political statement.

A little digging into Brooks’ background would’ve told fans he’s an Oklahoma State alum and has even met the College and Pro Football Hall of Famer.

Is Garth Brooks a Democrat?

Country Music hist Jan 18th: 2009, Garth Brooks sings "We Shall Be Free" at the inaugural for President Barack Obama pic.twitter.com/atpS5lI3lb

Garth Brooks wasn’t wearing a Bernie Sanders jersey, but that doesn’t mean he isn’t a democrat. In fact, he’s been lauded by some for his liberal and progressive lyrics in certain songs.

The New Yorker called him “country music’s most famous liberal voice” and his politics “broadly progressive.” He’s name-dropped John F. Kennedy and Martin Luther King in a song and tackled gay rights in the 1992 song “We Shall Be Free.”

Fans began to wonder which way he leaned when voting after he skipped out on playing at Donald Trump’s inauguration, citing tour logistics. He also handled talking about today’s political climate like a true diplomat:

“We can’t thank the Obamas enough for serving this country, and may God hold Trump’s hand in the decisions that he makes in this country’s name as well.”

That may not tip Brooks’ hand as to which party he identifies with, but that’s a message I think we can all get behind.