Held up at knife point, dude KO’s robber and then takes a selfie with him 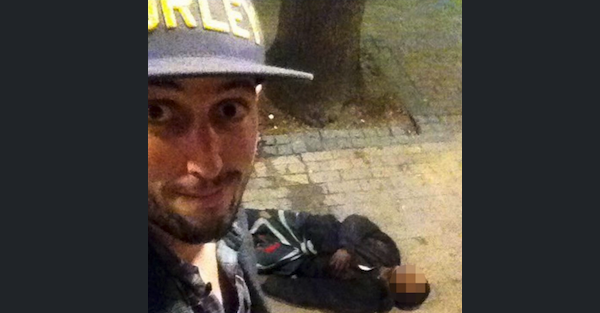 Guess you never know who you’re mugging these days.

That’s the lesson learned by a would-be robber in Capetown, South Africa when his target turned out to be trained in self-defense, and knocked him out cold. He was then humiliated even further by ending up on a selfie of the dude standing over his knocked-out body, which was later posted to Facebook.

?Looking at the selfie, some people think I look arrogant? this guy went out with intent, with purpose, to rob. I am glad it happened to me and not some 18-year-old first-year student,? Nathan Wood told News 24 after he punched the mugger in the jaw when he was approached by the man and accomplice.

Wood, 27, said the two men followed him and a friend he was with down an alley and actually appeared friendly at first. But then one of them brandished a knife and demanded money.

?They then asked for my wallet and cellphone. I was like, ?Absolutely not. These are my possessions and I am not willing to share.??

Wood said the man with the knife then held it to his chest and began checking his pockets. That’s when, Wood said, he clocked the man in the jaw. His accomplice then fled the scene. About the selfie, Wood explained he felt it was more about justice than showboating.

In any case, Wood is now officially a bad ass.