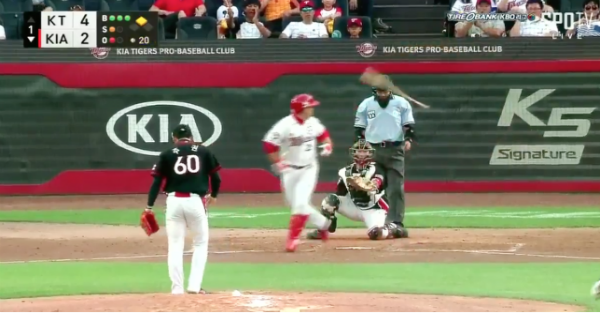 This video clip’s getting a lot of play as how not do a bat flip, but it’s much more of a toss towards the dugout that never really took flight. The player’s name is Lee Bum-Ho of the Korean Baseball League’s Kia Tigers, and after taking ball four for a walk (the pitch actually looked like a strike but that’s an altogether different story), he appeared to flip his bat rather stylishly.

RELATED: This player may have taken the bat flip craze a little too far

Unfortunately, it boomeranged after a couple flips and hit the home plate umpire on its way down. Bum-Ho got a bit of a glare from the ump, but that’s about it. In his defense, we may have some cultural differences with the far east, but nobody’s flipping their bat after a walk.