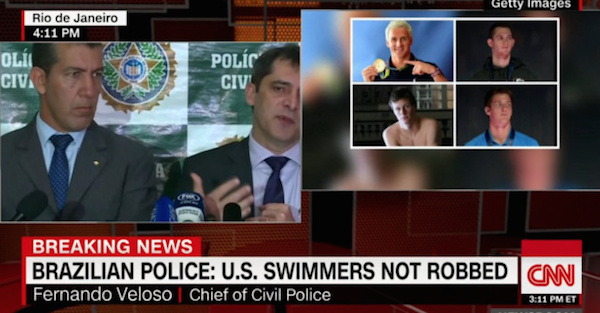 Brazilian news outlet reporting Ryan Lochte and Jimmy Feigen have both been indicted for false reporting of a crime https://t.co/kYMuKwJCUg

Brazilian police: US swimmers could face charges after lying about robbery https://t.co/c0ccVXgBmZ pic.twitter.com/QCTtWvJNOF

“The only truth they told is that they were drunk,” Chief of the Civil Police Fernando Veloso in Rio said at a press conference Thursday afternoon. You can watch the whole press conference above.

According to the Daily Mail, U.S. swimmers Jack Conger and Gunnar Bentz have confessed about the false story.

The situation has quickly devolved into the realm of national embarrassment, and reading the timeline shows just why.

This story has unfolded oddly since it broke Sunday. First, Lochte’s mom told news outlets that her son was robbed. Then, the International Olympic Committee (IOC) said news of the incident was “absolutely not true.” Next, Lochte did a beach interview with NBC’s Billy Bush and said a gun was cocked that night and pointed at his forehead, and that armed men posing as police were the culprits.

He also said the men robbed him and his teammates.

“And then the guy pulled out his gun, he cocked it, put it to my forehead and he said: ‘Get down,’ and I put my hands up, I was like ‘Whatever,’” Lochte said. “He took our money, he took my wallet. He left my cell phone, he left my credentials.”

Late Wednesday night, Conger and Bentz were prevented from leaving Brazil on a plane and asked to surrender their passports after a Brazilian judge saw some discrepancies in the robbery story.

Today, Brazilian authorities say the story was fabricated to cover up an incident at the gas station originally said to be the scene of the crime.

Security footage first aired on Globo TV in Brazil shows the swimmers leaving the gas station in a rush.

According to Globo, an armed security guard tried to prevent the swimmers from leaving the site. As if the story couldn’t get any stranger, Lochte and co. reportedly damaged a bathroom at the gas station and peed on the walls before attempting to leave in a taxi.

Here’s an excerpt of Globo’s report:

Then the swimmers went to the taxi, but the taxi driver obeyed the order of safety to await the arrival of the police. Police arrived to be triggered, as long in coming, the swimmers were aggressive and security would have pointed the gun to prevent them leave the site. It would have been done, then an agreement so that the swimmers pay for the damage.

Lochte is the only one of the swimmers who is back in the United States, while the others remain in Brazil for questioning.

So what happens to Lochte?

The New York Daily News speculated that Lochte may not be extradited given the language of the U.S.-Brazilian extradition treaty in place right now, effectively leaving his swimming teammates, well, hung out to dry.

Here is the relevant portion of that article:

The United States and Brazil share an extradition treaty allowing for the exchange of criminals charged with various crimes, including murder, rape, malicious wounding and other offenses.

Falsifying a police report in Brazil is punishable by up to six months in detention or a fine, but the misdemeanor charge is not listed in the extradition treaty.

Given the nature of the accusations against Lochte, and the fact that the swimmer legally left Brazil before the judge’s order, the 12-time Olympic medalist shouldn’t worry about being extradited, lawyer David Kubiliun said.

The situation didn’t seem to bother Lochte much earlier Thursday, when he uploaded silly pictures to his Instagram account that have since been deleted, we’re guessing for optics purposes.

But even if Lochte doesn’t end up behind bars for a few months, he still could be hit where it hurts the most: his wallet.

Loss of endorsements due to Lochtegate seems a mere formality at this point. Given that Lochte made $2 million off of endorsements in 2012, it seems likely that he stands to lose just as much or more.