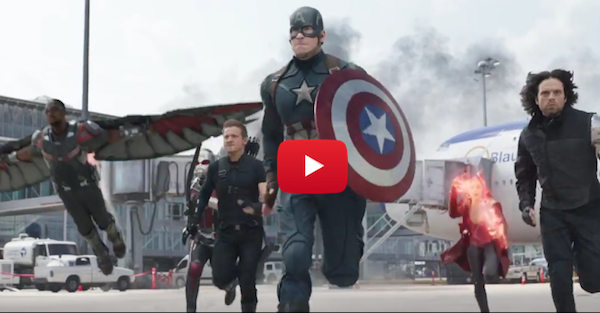 Are your Spidey senses tingling? They should be with the release of the new trailer for “Captain America: Civil War” by Marvel. It features new scenes — like the one where Black Panther chases down Bucky on foot and catches him even though Bucky’s on a motorcycle — bigger (or smaller in Ant-Man’s case) sequences for the smaller role characters and a super angry Tony Stark/Iron Man.

The Scarlet Witch tangles with The Vision, Bucky almost takes out Tony and Cap definitely gets a war started (duh, that’s the name of the movie!). Ant-Man’s role looks promising and of course we get a Spider-Man cameo after wondering what he might look and sound like after Tom Holland took on the web slinger persona. Spidey’s role in this movie has been kept under wraps and we likely won’t have any details until the movie comes out, but he totally stole Cap’s shield! It’s about to get good.