5 winners and losers from the 2015 NBA Draft 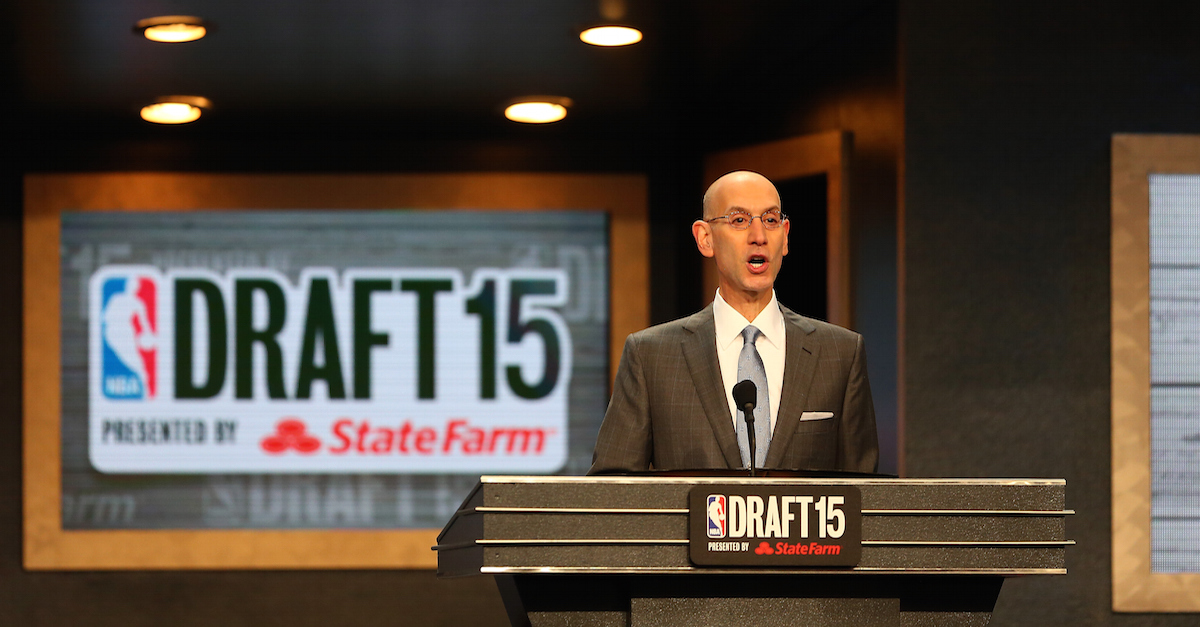 NEW YORK, NY - JUNE 25: Commissioner Adam Silver addresses the crowd before the start of the First Round of the 2015 NBA Draft at the Barclays Center on June 25, 2015 in the Brooklyn borough of New York City. NOTE TO USER: User expressly acknowledges and agrees that, by downloading and or using this photograph, User is consenting to the terms and conditions of the Getty Images License Agreement. (Photo by Elsa/Getty Images)

Karl-Anthony Towns landed with the Minnesota Timberwolves at No. 1 overall, as expected, but from there, things didn’t quite fall into place.

With that said, let’s take a look at the five winners and losers from Thursday night.

Boston Celtics – Losers
Tough night for Boston, which wasn’t able to get into the top-10 despite numerous reported attempts. Boston eventually had to settle for the team’s best available at No. 16, Terry Rozier, who is essentially exactly what the team has at guard currently. R.J. Hunter is a nice shooter and should translate well, competing with the likes of James Young for playing time. Jordan Mickey is a rim-protector and shot blocker, which comes as a steal in the second round.

Houston Rockets – Winners
Sam Dekker fell to Houston at No. 18, and he’ll have a ton of opportunity for playing time with a similar skill-set as Terrence Jones, who is reportedly on the trade block. Montrezl Harrell was a projected late first-round selection, but fell to Houston early in the second round. He’s got a great motor and is a stout rebounder, providing more size for a strong Rockets team.

New York Knicks fans – Losers
New York fans expected a playmaker to have an impact right away. That won’t happen, but long term, Kristaps Porzingis could be the real deal. While fans clamored for Justise Winslow, Porzingis projects to be one of the true elite talents from the draft. You couldn’t tell that by fan’s responses here and here.

New York Knicks  – Winners
Phil Jackson feels comfortable with what he’s done as evidenced by his move to take Porzingis at No. 4. He’ll have time to develop under Jackson and head coach Derek Fisher, and projects to be the next big thing in the NBA. Whether he works out in the long run or not could determine how long James Dolan keeps Jackson around.

Miami Heat – Winners
No one projected Justise Winslow to slip to the Heat at No. 10. He’s a big-time playmaker, a winner and a perfect fit for Miami. Winslow fits right into the small forward gap and provides a stable fit for the Heat should Dwyane Wade and Goran Dragic return.

Frank Kaminsky – Loser
Kaminsky fell to a Charlotte Hornets team with depth and similar skill at his position. Unless the team opts to move Cody Zeller or Spencer Hawes, this move doesn’t make much sense.

Philadelphia 76ers – Losers
Philly nabbed Jahlil Okafor at No. 3 overall, making him the third big man the 76ers have acquired over the previous three seasons. Emmanuel Mudiay probably makes more sense at this pick, simply because the Sixers need a point guard. Whether a trade is in the works is yet to be known. Okafor was the best pick at the slot, and he could be better than Nerlens Noel or Joel Embiid, but stocking up on centers doesn’t show much foresight.

Oklahoma City Thunder – Winner
Cameron Payne could have gone anywhere in the top 10, but his fall to the Thunder gives Billy Donovan his replacement for Reggie Jackson at reserve point guard, and a fallback option if Russell Westbrook is injured again. He’s a steal for OKC.

D’Angelo Russell – Winner
Russell got what he wanted, and that’s the ability to learn from Kobe Bryant. He’ll be a great fit for the Lakers, and paired next to Jordan Clarkson, Kobe Bryant and whatever free agents Los Angeles can acquire, should put together a pretty cohesive Western Conference team for the future.

Atlanta Hawks – Losers
Atlanta moved down from No. 15, and in an attempt to protect cap space, eventually nabbed Tim Hardaway Jr. He’s a solid shooter, decent defender and will likely come off the bench. The Hawks also acquired two draft picks (draft-and-stashes) and just seemed focused on the offseason. This move shows no foresight, and obviously Atlanta didn’t value anyone at No. 19.