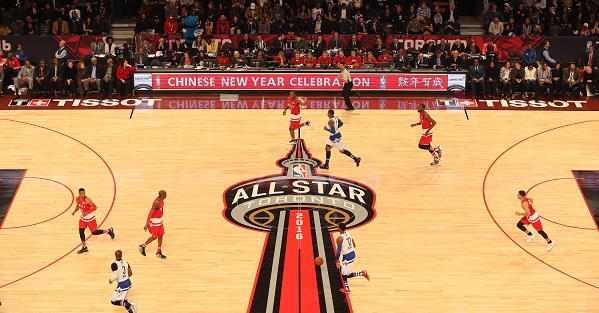 Twitter/Vaughn Ridley
TORONTO, ON - FEBRUARY 14: A general view as Paul George #13 of the Indiana Pacers and the Eastern Conference brings the ball up court in the first half against the Western Conference during the NBA All-Star Game 2016 at the Air Canada Centre on February 14, 2016 in Toronto, Ontario. NOTE TO USER: User expressly acknowledges and agrees that, by downloading and/or using this Photograph, user is consenting to the terms and conditions of the Getty Images License Agreement. (Photo by Vaughn Ridley/Getty Images)

The All-Star game voting has been often and fierce this year with fans everywhere finding any way possible to vote their favorite players into mid-season event. Towards the top of the list are the usual suspects LeBron James, Kyrie Irving, Carmelo Anthony, etc but also near the top is a name not many people expected to see, Zaza Pachulia.

Over in the West, Pachulia currently has more votes than Kawhi Leonard, Anthony Davis, Draymond Green, and DeMarcus Cousins. This might come as shocking to some, but actually this has become a pretty common theme in NBA voting every year. Pachulia is from the country of Georgia, and around the time All-Star voting opens up, the country usually pours out in mass to vote for their favorite NBA big man. He was one spot shy of making it to last year’s team, but right now he has a comfortable lead ahead of many of the NBA’s best forwards.

With a system that’s heavily reliant on fan voting outcomes like this should be expected. This is not to take away from Pachulia, one of the most lovable players in the NBA, but he would not have any chance at the All-Star game if it wasn’t for the fan vote. Ya know what though? That’s awesome. If his fans are going to come out in force and support their favorite player then let them do it. There’s nothing that says they can’t, and that’s really what fandom is all about.

It also gives us reason to look back at the greatest moment in NBA history. LONG LIVE ZAZA!