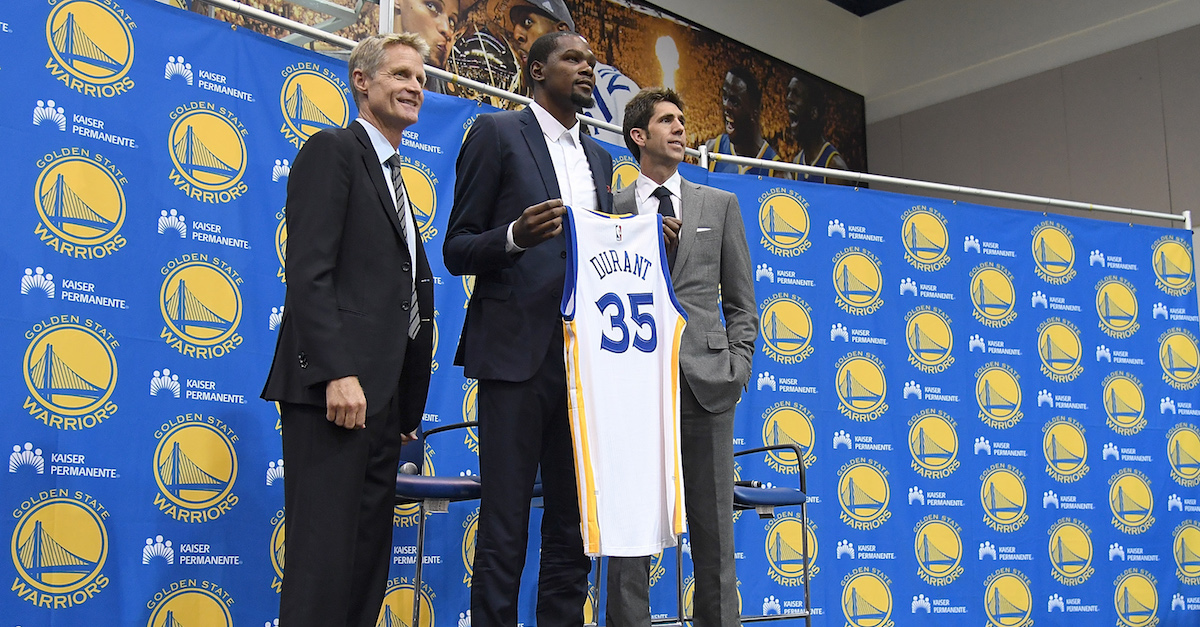 OAKLAND, CA - JULY 07: (L-R) Head coach Steve Kerr of the Golden State Warriors stands with Kevin Durant #35 and general manager Bob Myers while they pose for this photo during the press conference where Durant was introduced as a Golden State Warrior after they signed him as a free agent on July 7, 2016 in Oakland, California. (Photo by Thearon W. Henderson/Getty Images)

There are plenty of reasons that people don’t like Kevin Durant signing with the Golden State Warriors. It creates a super team or it isn’t fair to Russell Westbrook and Oklahoma City, you name it. There have been all kinds of rationalizations for it, but the reality is that he is certainly allowed to do that and the contract has been signed.

RELATED: This ringless legend says Durant is trying ‘to cheat’ his way to a title

Charles Barkley thinks Durant is “cheating” his way to a title and Reggie Miller was pretty upset about the move as well having played his entire 18-year career in a small market as well. However, those guys got to experience free agency still in that they could still get courted by teams if they wanted to leave.

However, there was one legend who never really got to experience free agency as we know it because it didn’t exist until 1988. That man is Larry Bird who retired in 1992 and even though he had four years of free agency, he never experienced it since his body had pretty much broken down starting in that 1988-89 season with bone spurs in his foot and then his back gave out on him after that.

RELATED: Durant’s decision to leave OKC reportedly came down to one person

Bird was speaking on ?SiriusXM NBA Radio? with hosts Mark Boyle and Chris Spatola and he compared his era with this one and what Kevin Durant did in free agency.

?Well, it?s hard, Mark, because when these players get together and go play it just makes them a lot stronger.  But that?s why we have free agency.  If they stay within the rules I have no problem with it and I?m happy for them but you like to be on a team where you can be competitive.  I know back in the day I couldn?t imagine going to the Lakers and playing with Magic Johnson.  I?d rather try to beat him.  But, you know, these guys are different and I understand a lot of it and it?s within the rules so they can do whatever they do.  I can remember years ago we were fighting, when I played, for free agency, you know, pure free agency so there?d be more movement.  But I could never imagine myself going and joining another team with great players because I had great players and I was in a great situation.?

Teams would have definitely looked very different had pure free agency existed back in Bird’s prime years and who knows? Maybe we would have had mega teams with even less teams in the league back then — making for a smaller and potentially better talent pool.

RELATED: Paul Pierce criticizes Durant decision, gets eviscerated on Twitter for it

However, Durant certainly has the right to choose where he works just like any other person so kudos to him on making a decision. Different eras are hard to compare — as everyone who compares MJ and LeBron knows — and so that’s why Bird will never truly get to know what guys like Durant and now Dwyane Wade have gone through.