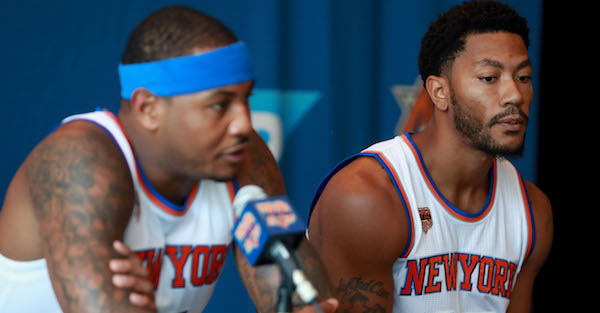 The Derrick Rose era is off to a murky start in New York, and the former MVP point guard considered walking away from the game recently, according to the New York Daily News’ Frank Isola.

Related: The Knicks reportedly don’t know where their star is, who is missing Monday’s game

Rose mysteriously missed the Knicks’ Monday night game against the New Orleans Pelicans, and he reportedly didn’t let any Knicks officials know he would be absent. ESPN’s Ramona Shelburne reported Rose returned to his hometown in Chicago to address a family situation.

According to sources Rose told the team he had a family situation.

According to Isola and his sources, Rose was an “emotional wreck” Monday, and he even considered walking away from basketball for a while to straighten things out.

However, Rose returned to the team Tuesday, and he was fined an undisclosed amount by the team, according to Sports Illustrated.

Rose is expected to play in the Knicks’ game at the Philadelphia 76ers Wednesday night. He is averaging 17.3 points and 4.5 assists per game this year.