With growing concerns over luxury tax, Warriors could lose crucial member of team to free agency 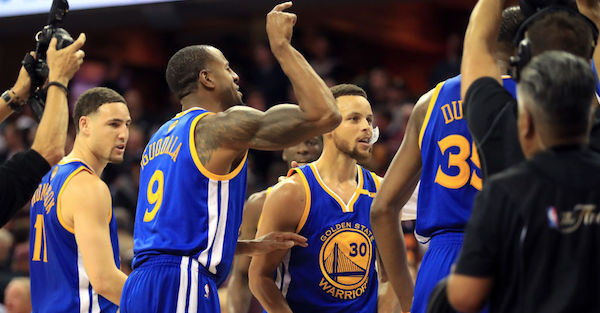 Ronald Martinez/Getty Images
CLEVELAND, OH - JUNE 07: Stephen Curry #30 of the Golden State Warriors celebrates with teammates after defeating the Cleveland Cavaliers in Game 3 of the 2017 NBA Finals at Quicken Loans Arena on June 7, 2017 in Cleveland, Ohio. NOTE TO USER: User expressly acknowledges and agrees that, by downloading and or using this photograph, User is consenting to the terms and conditions of the Getty Images License Agreement. (Photo by Ronald Martinez/Getty Images)

The Golden State Warriors may be riding high from another NBA championship, but they could be on the verge of losing one of their most important pieces to their team this summer: Andre Iguodala.

The Vertical’s Shams Charania is reporting that not only could the Warriors lose Iguodala for luxury tax reasons, the veteran swingman will be fielding offers on midnight Saturday.

This is a bad situation for the Warriors, as they’re already up against the wall financially with the impending Stephen Curry and Kevin Durant extensions. With NBA analysts already predicting that Iggy can likely get $20 million annually from other teams, he would no doubt have to take some sort of pay cut to stay with Golden State.

It’s going to be interesting to monitor over the next couple of days whether or not the Warriors end up being able to retain Iguodala, or if he takes the final big contract offer elsewhere.