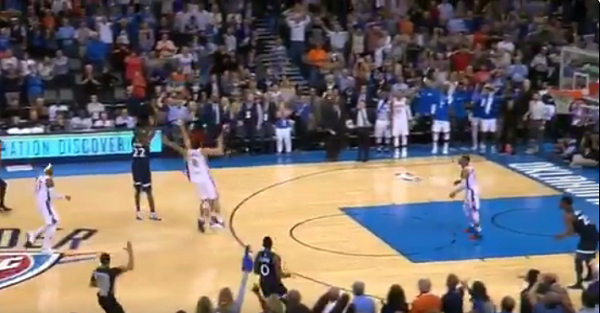 The Minnesota Timberwolves and Oklahoma City Thunder got a whole lot better this off season as both got some much needed upgrades at key positions. Improved teams means an improved game and we got a great ending because of it as Carmelo Anthony came down and hit a go-ahead bucket, but former Rookie of the Year Andrew Wiggins had an answer for him as he hit a buzzer-beater to make it a 115-113 win for the Wolves:

The Wolves added Taj Gibson, Jimmy Butler and added perennial Sixth Man of the Year candidate Jamal Crawford. The Thunder added Paul George and Carmelo Anthony via trades so it’s no surprise this game came down to the wire. Wiggins finished with 27 points, two steals, four assists and seven rebounds for the game while OKC’s Big Three combined for 68 points on the night.