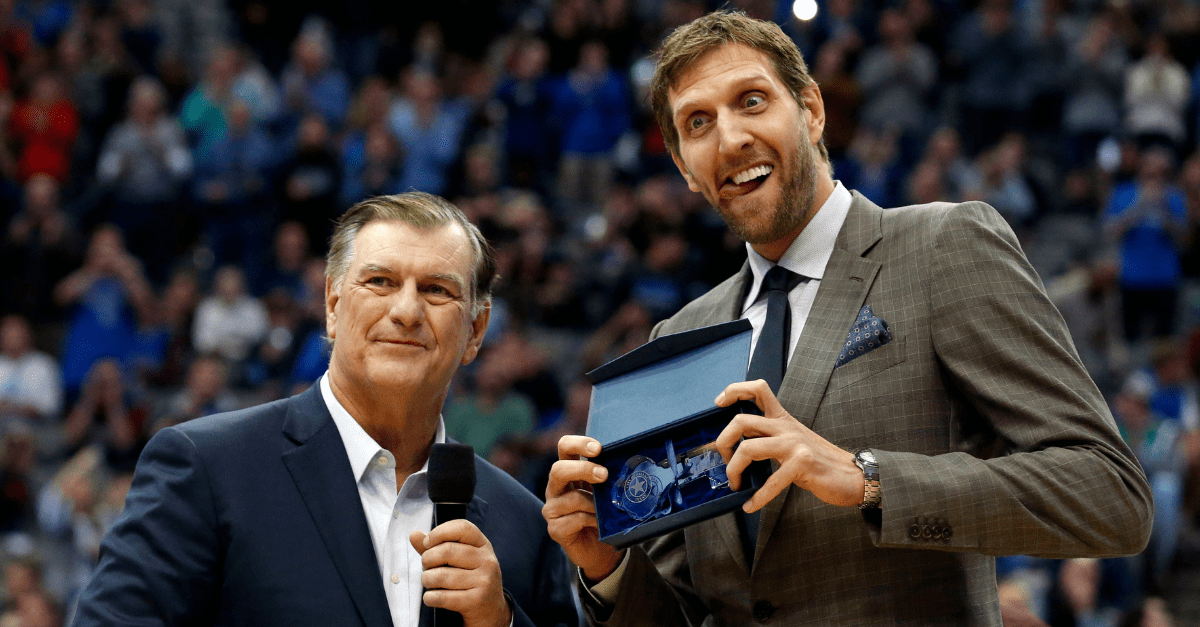 DALLAS (AP) ? Dirk Nowitzki was ready to take the court Wednesday night ? at halftime, for a ceremony in which the Mavericks star was presented a key to the city by Dallas Mayor Mike Rawlings.

As for when the 7-foot German’s record 21st season with the same franchise will begin after a longer-than-expected recovery from ankle surgery seven months ago, Nowitzki said the goal is sometime in December.

The 🐐 has been the 🔑 to this franchise for more than two decades. Now he has a 🔑 to the city. pic.twitter.com/lHzauVwM3I

Nowitzki spoke alongside Rawlings before the ceremony during the Mavericks’ game against Brooklyn.

“It’s just hard when I haven’t done much for eight weeks and there’s a 40-year-old basically starting from scratch to try to get back in shape to play NBA minutes,” Nowitzki said. “Hopefully soon. Hopefully, somewhere in December I’ll be ready and the body will respond the right way.”

Nowitzki is set to become the first player to spend all 21 seasons with the same team. Until he makes his debut, he will technically share the record of 20 seasons with Kobe Bryant, who retired from the Los Angeles Lakers in 2016.

The 2007 NBA MVP said he started running on a treadmill about two weeks ago and has steadily increased the intensity. Nowitzki has played in a couple of games involving staff members during practice. But until he goes through several full practices, his debut will have to wait.

“The reason why we’re taking it so slow now is once I get out there, I want to finish the rest of the season healthy,” Nowitzki said. “I don’t want to come back too soon now and then have setbacks again like I did with the Achilles a few years ago. Next thing you know I missed another few weeks.”

Nowitzki said the significance of this debut hasn’t made him any more anxious than the painstaking wait when all indications were the surgery wouldn’t affect what could ? and many presume will be ? his final season.

I got the key, key, key…. pic.twitter.com/qROZUnJZcy

“I’ve been antsy,” he said. “Had the surgery in April and it’s been nothing but rehab and treadmills. Love to step out there soon and get the kick of competing, the crowd involved. It’s just something I miss. And once my career is over, that’s for sure something I’ll miss, the kick, the rush, the adrenaline.”

Nowitzki said he wasn’t ready to decide how the injury will influence a decision on a possible 22nd season.

Either way, Rawlings didn’t want to wait past this season to honor the player who led the Mavericks to their only championship as the NBA Finals MVP in 2011 and is the highest-scoring foreign-born player in NBA history with 31,187 points, seventh on the all-time list.

Rawlings lauded Nowitzki for his willingness to be visible in public, mentioning that he was elected the same night Nowitzki was celebrating a birthday and they ended up at the same club.

“A kid came here that was skinny and didn’t really know much about life and only lived at home,” Nowitzki said earlier. “Like I said earlier, grew into a man here. Off the court, try to help out, try to help this great city be better. Try to represent the city the right way.”