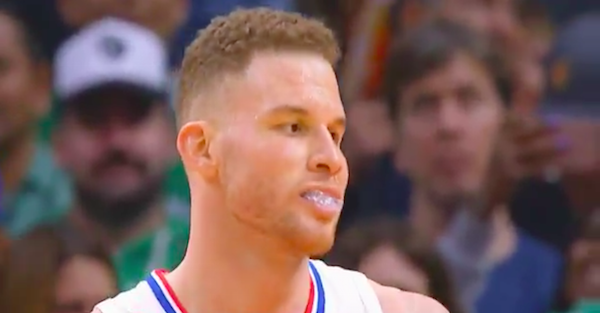 Los Angeles Clippers forward Blake Griffin appeared to be cursing at a referee after being called for a technical foul during Wednesday’s game against the Boston Celtics.

Griffin seemingly told the referee, “Now I gotta pay money because you can’t f*****g catch,” after being called for a technical foul for the way he threw the basketball back to the official.

Blake Griffin gets a tech for throwing a ball at a ref and then says, "Now I gotta pay money because you can't f—–g catch." pic.twitter.com/tShAI5Wk1G

Granted, the replay does seem to show the throw being noticeably lower and harder than the typical pass after a dead play.

Still, it seems like a silly reason for a player to pay a hefty fine over, especially in the heat of a losing effort.

The Celtics defeated the Clippers, 113-102, despite Griffin’s 23-point effort in the loss.