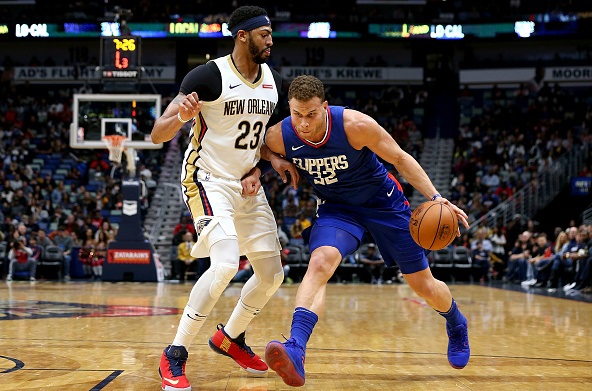 Sean Gardner/Getty Images
<> during the second half at the Smoothie King Center on November 11, 2017 in New Orleans, Louisiana. NOTE TO USER: User expressly acknowledges and agrees that, by downloading and or using this photograph, User is consenting to the terms and conditions of the Getty Images License Agreement.

Los Angeles Clippers forward Blake Griffin will reportedly miss two months with a sprained MCL in his left knee, according to Adrian Wojnarowski of ESPN.

Griffin suffered the injury on Monday night against the Los Angeles Lakers. See the play below:

No official word yet on the severity of Blake Griffin’s knee injury, but – um – the video does not look good. pic.twitter.com/sUTHGml3do

It looks as though Griffin was rolled up on by teammate Austin Rivers after going for a loose ball on the floor. While replay of the injury doesn’t look good, Woj reported that there was no structural damage to Griffin’s knee after an MRI on Tuesday.

The team has dealt with their fair share of injuries to this point. Guard Milos Teodosic is dealing with a foot injury that has sidelined him since the second game of the season and isn’t expected back until after Christmas. Forward Danilo Gallinari has been out since Nov. 5 with a glute injury and guard Patrick Beverley is out for the rest of the season after undergoing knee surgery.

It has been quite a start for the Clippers already this season. After starting with a 5-2 record, they dropped their next nine games to fall to 5-11. Since that losing streak, they have now won three in a row, but figure to struggle now with Griffin out of the lineup.

Without Griffin now, the Clippers could be in for a rough upcoming road.