Both Doc and Austin Rivers are hilariously ejected in game vs. Houston 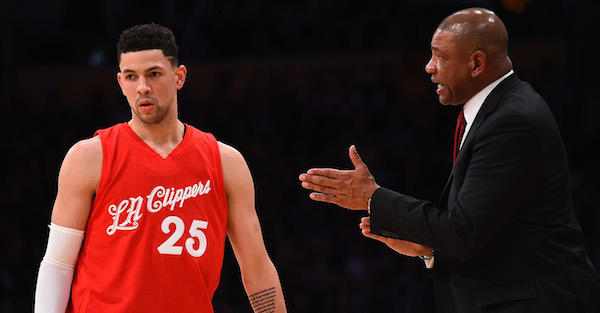 Doc and Austin Rivers had some quality father-son bonding time after both were ejected during the first half of the Los Angeles Clippers’ 140-116 loss to the Houston Rockets Friday night.

Austin Rivers was ejected after he bumped into official J.T. Orr with under seven minutes to play in the first half. He yelled at Orr and had to be escorted off the floor by a Clippers employee after the ejection. He had to be held back by the employee from going back onto the court.

Doc Rivers was ejected after complaining about a call involving Marreese Speights. Speights was awarded free throws when he shouldn’t have been, and Rivers complained to head official Jason Phillips.

Mike Woodson took over as coach after Rivers was ejected. Doc said his son was fairly ejected from the game.

“They’ll say he made contact, which he did, but it wasn’t intentional, which is clear,” Doc Rivers said. “You can’t judge intent; that’s why they will say there was contact, but there’s nothing you can do about it. I felt bad for him, [but] that’s not why I was thrown out. I was thrown out for a different reason.”

Austin, however, defended his actions to reporters after the game.

This was the third time this season Doc Rivers has been ejected. Both he and Austin were ejected during a game against the Washington Wizards on Dec. 18.