Carmelo Anthony reportedly “cautiously optimistic” he will be traded by Monday 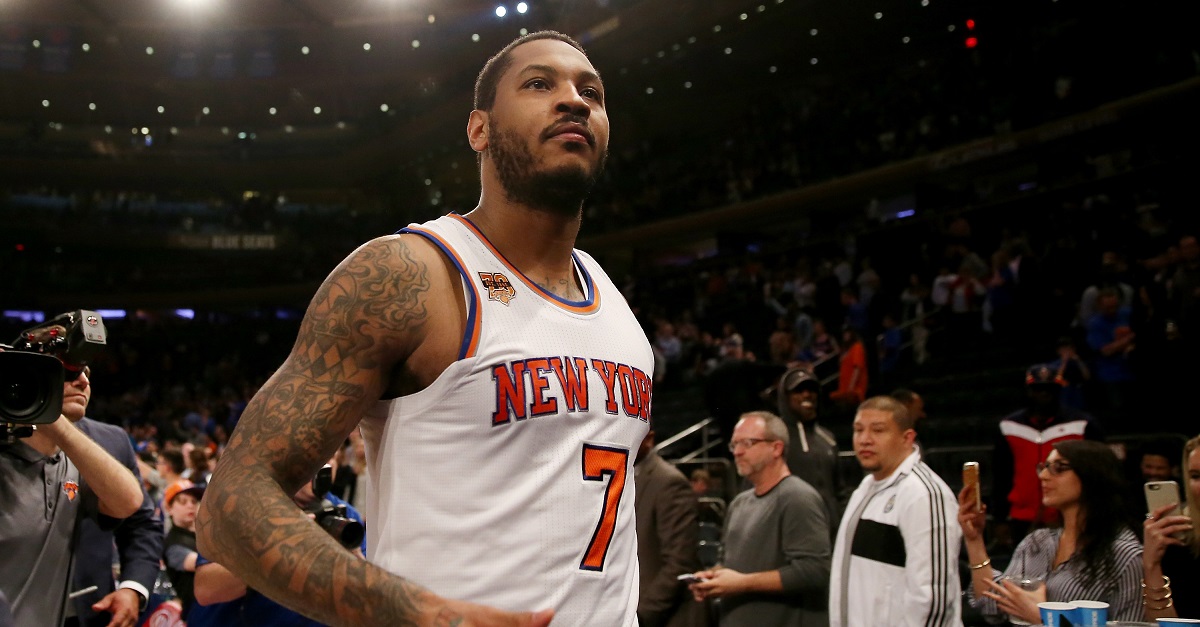 Elsa/Getty Images
NEW YORK, NY - APRIL 12: Carmelo Anthony #7 of the New York Knicks walks off the court after the 114-113 win over the Philadelphia 76ers at Madison Square Garden on April 12, 2017 in New York City. NOTE TO USER: User expressly acknowledges and agrees that, by downloading and or using this Photograph, user is consenting to the terms and conditions of the Getty Images License Agreement (Photo by Elsa/Getty Images)

The Carmelo Anthony trade saga is apparently not over according to Frank Isola of the New York Daily News. Anthony has a no-trade clause in his contract and has made it quite clear that the only team he would consider allowing a trade to is Houston.

Isola is reporting that Anthony’s camp is “cautiously optimistic” that not only will a trade go down, but it will come before this Monday:

Anthony?s camp is cautiously optimistic that a deal will be struck before Monday, and trying not to think about the potential media circus that will take place if Carmelo is still with the Knicks. Two weeks ago, Carmelo?s wife, La La, said the family thought a trade would have been completed by now.

Mentally, Carmelo and his family have moved on to Houston. Reality is another story. Hopefully, Mills and Perry will have the right answers when they address the media on Friday because the Carmelo issue isn?t going away until he goes away.

The Rockets have made it clear on their end that they intend to shed forward Ryan Anderson’s 3-year, $60 million contract in a trade for Melo. However, the Knicks wouldn’t want to take on that kind of salary considering they just gave a ton of it to Tim Hardaway Jr. this summer. A third team would likely have to enter the fray, but there likely isn’t anyone available to take a salary dump and be willing to help two other teams in the process.

However, it sounds like there might be one team dumb enough and near enough to the salary floor that could step in and facilitate a trade for Anthony to end up in the already stacked Western Conference.