Cleveland makes history thanks to crazy dagger from Kyrie Irving 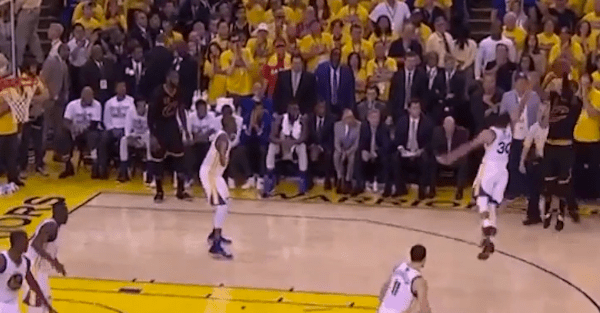 This year’s NBA Finals was a rematch of last season’s with the Golden State Warriors and Cleveland Cavaliers meeting once again to decide who would be the champions. There weren’t any close games until the last one as all six previous games were decided by 10 points or more. This game was everything the fans were promised and then some with a final score of 93-89 in favor of the Cleveland Cavaliers.

Kyrie Irving continued to be a monster as he finished with 26 points, one assist and six rebounds and just made some absolutely unbelievable shots like this:

And made this dagger to ice the game:

LeBron James was phenomenal as well as he took over in the fourth quarter and had a triple-double — his seventh in the Finals — with 27 points, 11 assists and 11 rebounds. He also had this unreal block on Andre Iguodala:

His play over the course of the seven games was enough to name him the MVP of the Finals and he now owns the Bill Russell trophy, at least until next year.

Draymond Green was incredible for the Warriors and had his best game of the playoffs and it wasn’t even close. He finished with a near triple-double of 32 points, nine assists and 15 rebounds. Klay Thompson and Steph Curry weren’t great, combining for only 31 points and really made some questionable decisions down the stretch.

This is the first major sports championship for the city of Cleveland since 1964 and the Cavs became the only team in NBA history to come back from a 3-1 deficit in a Finals series.