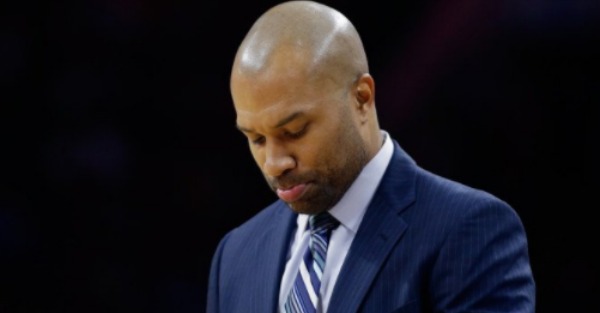 Derek Fisher, the 5-time NBA champion point guard who later went into coaching, was arrested Sunday after a car he was driving overturned in California.

Fisher was driving a 2015 Cadillac when his vehicle veered right, continued across the right shoulder and hit the raised concrete curb and wood/metal guardrail, according to a California Highway Patrol account, which was reported by NBC Los Angeles.

The car landed on its roof, and Fisher and and a passenger, Gloria Govan, had to be helped out of the car, the CHP said. Fisher was arrested on suspicion of drunk driving, NBC LA reported, but  there was no word on whether the former player he was jailed.

Fisher played 18-years in the NBA, mostly with the Los Angeles Lakers. He averaged 8,3 points per game over his career, but was valued for his leadership and ability to control the game. That leadership lead him into coaching, when he became coach of the New York Knicks from 2014-2016. He was fired in the 2015-2016 season after going a combined 40-96.

Govan, a reality star who was once on “Basketball Wives,” has been romantically linked to Fisher. Fisher and Matt Barnes, Govan’s former husband, were involved in an altercation in 2015 when a furious Barnes confronted Fisher about him supposedly romancing his estranged wife. One witness claimed Barnes punched Fisher in the mouth,