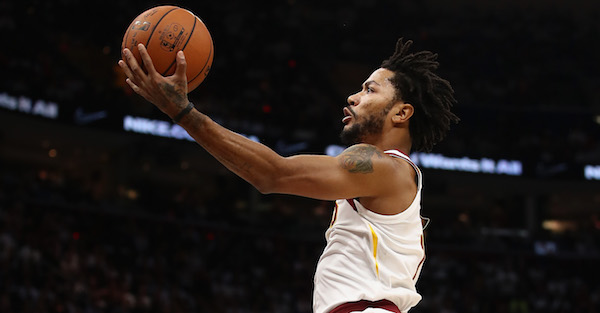 Gregory Shamus/Getty Images)
CLEVELAND, OH - OCTOBER 17: Derrick Rose #1 of the Cleveland Cavaliers drive to the basket past Gordon Hayward #20 of the Boston Celtics during the first half at Quicken Loans Arena on October 17, 2017 in Cleveland, Ohio. NOTE TO USER: User expressly acknowledges and agrees that, by downloading and or using this photograph, User is consenting to the terms and conditions of the Getty Images License Agreement. (Photo by Gregory Shamus/Getty Images)

It has been quite some time since Derrick Rose was a top-tier NBA player but the former MVP seemingly carved out a role as a second-unit offensive creator on the Eastern Conference favorite Cleveland Cavaliers. Unfortunately, Rose’s body has repeatedly failed him in recent years and that has been the case again with an ankle injury that has kept the point guard out of action since Nov. 7.

On Friday afternoon, Adrian Wojnarowski of ESPN brought word that Rose has now reportedly left the Cavs and is “evaluating his future in basketball” at this juncture.

Story with @mcten filed to ESPN: Cavaliers guard Derrick Rose is away from team and evaluating his future in basketball, league sources tell ESPN. Story soon on site.

This is an ominous report but it seemingly centers on frustration from Rose concerning his injury history.

As one Cavaliers source tells ESPN about Rose: "He's tired of being hurt and it's taking a toll on him mentally."

Rose is theoretically set for life from a financial standpoint, having banked tens of millions in the early portion of his career, both in on-court earnings and off-court endorsements. Still, Rose is still only 29 years old and, while he entered the league very young, it is crazy to consider that his career path could be coming to an end.

It remains to be seen as to what kind of public statements will be made by Rose and/or the team but, for now, it appears as if he is taking a break to consider his standing.