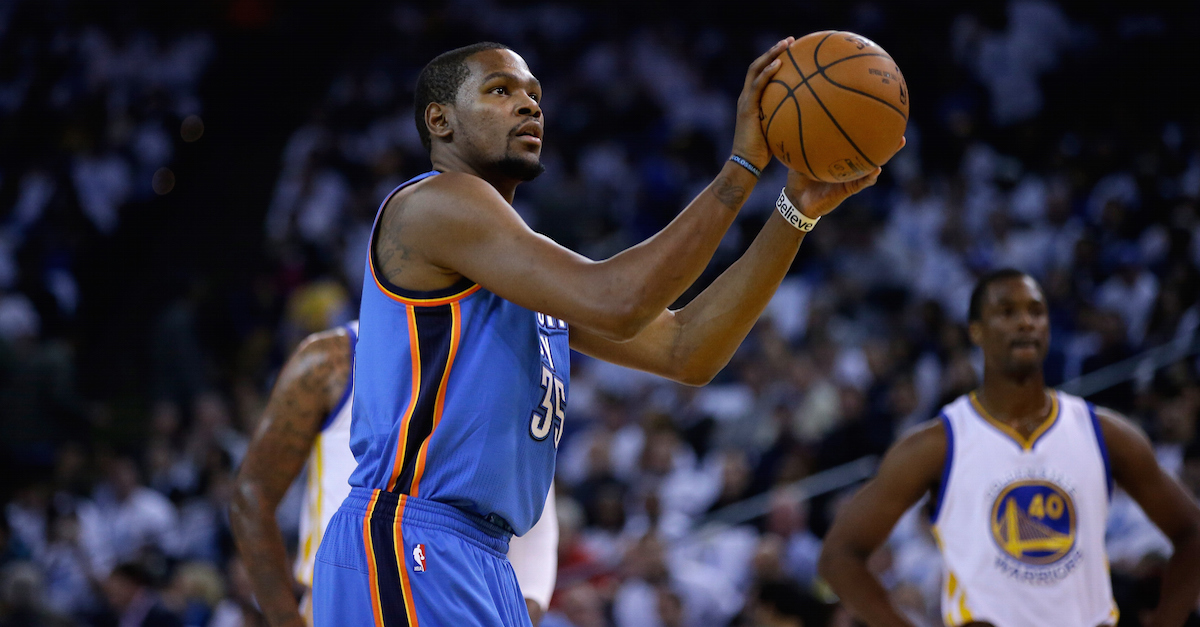 Oklahoma City Thunder forward Kevin Durant has been loyal to the team that drafted him.

He inked a five-year deal in 2011 with no outs and as he prepares to enter free agency yet again in 2016, he’s got a different perspective.

Loyalty being a word Kevin Durant has had to become wise to. He heard the Sterling tapes like everyone else. “When that came out, we was just like, ‘Oh, so that’s how they feel about us?’ ” All this rhetoric about team, about loyalty. And then guys like Sterling basically acting in private like their players are property. “When players do stuff that benefits them, they’re looked at as unloyal, selfish,” Durant says. “But when a team decides to go the other way and cut a player, or not bring him back or not re-sign him, it’s what’s best for the team, and that’s cool. But what we do is frowned upon, you know?”

“I was loyal. If it comes down to that, I mean: I was. My deal’s up in 2016. I’ll have been here nine years. I could have easily wanted out. I could have easily not signed the extension after my rookie contract. But people tend to forget.” Same thing happened to LeBron James, when he switched teams and they burned his jersey. Kevin watched it like, Damn. “This is not just a game for us. This is life. Like, we live and die and breathe by basketball. We’re away from our families to entertain other people.”

Were the Thunder being loyal to Durant and his teammates when they traded James Harden, two and a half years ago, breaking up the best young core in the league in order to save a few luxury-tax dollars? Has the team ever really given Durant what he needs to win? Durant has been asked this question so many times he may not realize that he’s begun answering it honestly. “Players are paid to do their jobs, no matter who’s on the court. And as superstars, you gotta lead what you have. You gotta make them better. Some players might be better than others. Some teams might be better than others. You gotta do your job, and you gotta trust that the front office is going to do their job. It’s hard, though. You know what I’m saying? Because it’s like, shit, I want win. Obviously our players aren’t as good as, you know, than they were before. But you have to figure it out.”

He’s trying to move on from a frustrating first half of the season, but it’s eye-opening to hear from a maturing Durant who appears to have a different mindset for the business.