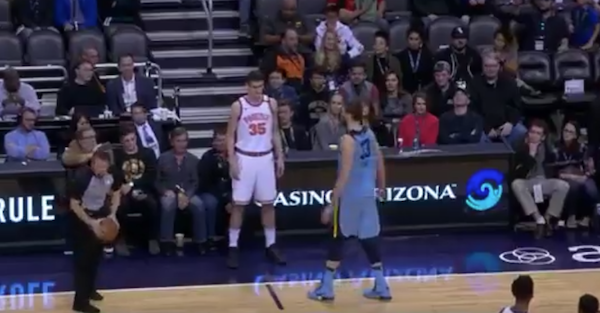 The name of the play is called ?Rim,? azcentral reported. It is designed for the inbounds passer to throw the ball into the basket, but have the Suns? center tip the ball through the net. What makes the play effective is that there is no goaltending on an inbounds pass in the NBA.

With 0.6 seconds left in regulation, Dragan Bender lobbed an inbounds pass toward the basket, and center Tyson Chandler slammed the ball through to give the Suns the lead with 0.4 seconds left.

?It?s a rule that a lot of people don?t know,? Triano said.

Tyson Chandler slams it home to win the game for the @Suns!#SunsAt50 pic.twitter.com/8Ee7WqU6u7

Triano said he installed the play shortly after he became the Suns? interim coach.?I was trying to create a play where you can score with 0.3 seconds or something,? he said.

?It was kind of crazy,? Bender said.

After the play, the officials went to the scorer?s table to review it, but Triano said he wasn?t worried, azcentral reported.

?I told the one official, ?You know that you can?t goaltend that,?? said Triano, who won his 100th game as an NBA coach. ?He was like, ?I know, I know.? I think they were probably looking to see if Tyson touched the ball because it?s a violation if it goes straight in and he doesn?t get a piece of it.?

Memphis still had 0.4 seconds left but couldn?t get a shot off before the buzzer. ?You know, once you look at the play you realize it?s the right play to do,? Bender told azcentral. ?Like I said, ?0.6 on the clock it?s really hard to get a good shot off.? That was the only option.?

?I?ve tried to keep it a secret,? Triano said. ?It?s not a secret anymore.?

?I thought (Triano) was crazy when he first told us,? Devin Booker told azcentral. ?I?m thinking if the ball is going in the hoop you can?t touch it.