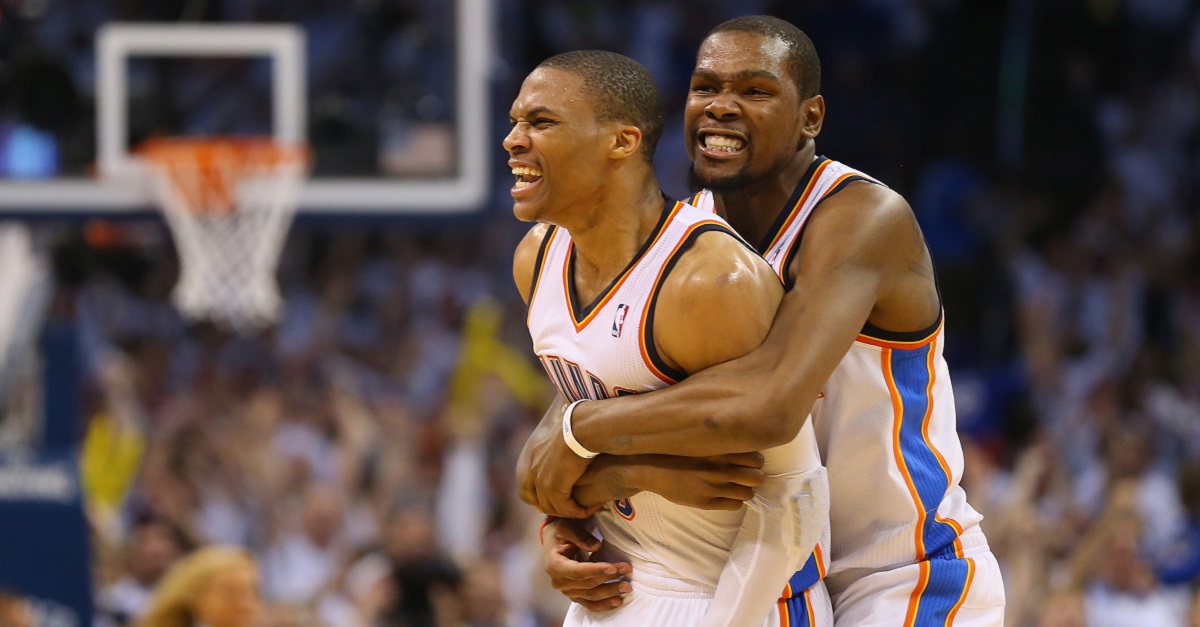 Ronald Martinez/Getty Images
OKLAHOMA CITY, OK - MAY 13: (L-R) Russell Westbrook #0 and Kevin Durant celebrate a 105-104 win against the Los Angeles Clippers in Game Five of the Western Conference Semifinals during the 2014 NBA Playoffs at Chesapeake Energy Arena on May 13, 2014 in Oklahoma City, Oklahoma. NOTE TO USER: User expressly acknowledges and agrees that, by downloading and or using this photograph, User is consenting to the terms and conditions of the Getty Images License Agreement. (Photo by Ronald Martinez/Getty Images)

It would have been such a juicy piece of information and another reason for Oklahoma City Thunder fans to hate Kevin Durant, but it simply wasn’t true. ESPN reporter Royce Young — who covers the Thunder — said earlier in the week that Durant and Russell Westbrook had a meeting before free agency began where KD basically guaranteed he would be back with the Thunder.

RELATED: Westbrook has every right to be pissed at KD after details of reported meeting emerge

Well, we all know how that ended up going and now he’s a Golden State Warrior. However, Young admitted to putting words in Durant’s mouth and he doesn’t actually know what was said in the meeting. He claims that he “misspoke” during one of his TrueHoop podcasts and that misled the public.

Young wrote he was attempting to convey the general feelings of Westbrook and others who met with Durant earlier this summer after teams pitched the four-time NBA scoring champion. So he put words in the mouth of Durant and now he looks the fool for not taking the time and effort to be clearer on the subject.