Former All-Star speaks out on his NBA future 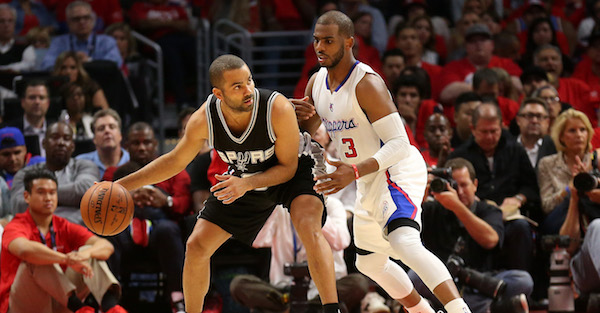 Stephen Dunn/Getty Images
LOS ANGELES, CA - APRIL 19: Tony Parker #9 of the San Antonio Spurs controls the ball against Chris Paul #3 of the Los Angeles Clippers during Game One of the Western Conference quarterfinals of the 2015 NBA Playoffs at Staples Center on April 19, 2015 in Los Angeles, California. NOTE TO USER: User expressly acknowledges and agrees that, by downloading and or using this photograph, User is consenting to the terms and conditions of the Getty Images License Agreement. (Photo by Stephen Dunn/Getty Images)

Tony Parker isn’t getting any younger and, when he went down with a ruptured quad during his team’s playoff series against the Houston Rockets, speculation began that the former All-Star point guard could retire. However, Parker doesn’t see that taking place, as he spoke to L’Equipe (translated by Eurohoops.net) about his future with the San Antonio Spurs and in the league as a whole.

“I will play my best basketball when I return in January”, Parker told L’Equipe. After his injury during the NBA playoffs, the player is on the road to recovery and already wants to give it all for next season.

“The first thing that came in when I got injured, was frustration. I was super good and we had the chance to go until the end and get the title,” Parker said.

“The coach’s plan worked like a clock. I was consistent, playing for twenty to twenty five minutes per game. My series against Memphis was good and I had a good start in the season,” he added.

Parker’s assertion that he “will play (his) best basketball” upon return in January seems optimistic, but it is a good thing for the league that he is focused on returning. Parker’s presence on the salary cap would likely prohibit San Antonio from making other big splashes in free agency, but the French point guard is a future Hall of Fame player that has spent his entire career with the organization.

Injury recoveries for players at Parker’s age (35) can be tricky but it appears that he’ll be ready to go sometime near January and the Spurs can now plan accordingly this summer.