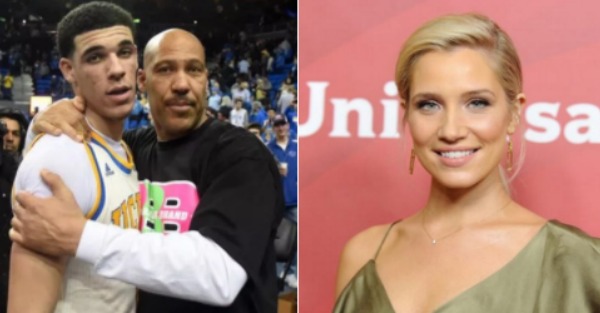 After LaVar Ball and FOX Sports radio personality Kristine Leahy went back-and-forth during Ball’s appearance on The Herd with Colin Cowherd, Ball told Leahy to “stay in yo lane over there.”

Ball, the boisterous father of projected first round pick Lonzo Ball, had these shirts made for his Big Baller Brand:

Leahy fired back on Thursday by tweeting out her support of a company called Girls Inc.

In lieu of shirts, join me in donating $50/60 or whatever you can to inspire all girls to be strong, smart and bold. https://t.co/RliviiD3zC pic.twitter.com/kvlewqFEHR

Love this. Behind you girl! Turn a negative into a positive. #girlpower https://t.co/fHT7oNIwIF

@KristineLeahy They don't pay the guys who tweet these things a ton of money, but we ❤️ @KristineLeahy. pic.twitter.com/dwClpwOpLS

@KristineLeahy Love it @KristineLeahy. Also donated to @girlsincchatt because my daughter Eliza is strong, smart and bold!!

LaVar Ball has been relentless in the marketing of his brand and his son, and he has received countless attention for his antics. Leahy’s response was clever and subtle, and hopefully the sales of Girls Inc. are more than the shirt Ball promoted.