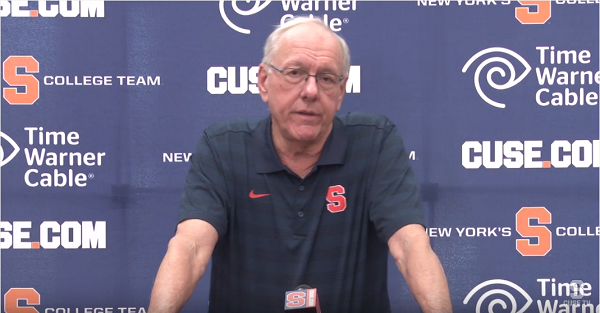 Carmelo Anthony has taken a lot of heat for his comments about being satisfied with three Olympic gold medals and now it seems his former college coach in Jim Boeheim is giving him a little crap too. The Orange head coach and Team USA assistant coach is still great friends with Anthony and so his comments might seem a little strange here.

RELATED: Melo says he would be happy even if he doesn’t win NBA title

Jim Boeheim via the Syracuse Post-Standard:

“He’s unlikely to win an NBA title. He’s never been on a team that even had a remote chance of winning an NBA title. As a player, all you can do is try to make your team better, and every team he’s been on he’s made them a lot better. Denver hadn’t done anything prior to him getting there and he took them into the playoffs. They weren’t going to beat the Lakers or the Spurs. In those years, they won the championship most of the time.”

If Melo keeps ending up on teams that had chances to win the 2011 NBA Finals then perhaps Boeheim is right here. A team with Derrick Rose, an older and hobbled Joakim Noah and various role players plus star-in-the-making Kristaps Porzingis is not going to cut it. Not even in the fairly weak Eastern Conference.

That might be a little cold from Boeheim there, but he did say that Anthony has made every team he’s on better, which is a nice compliment. The 32-year old Anthony made the playoffs in each of the first 10 seasons of his career, but he has advanced past the first round just twice. Anthony’s New York Knicks have missed the postseason for the past three years.

RELATED: D-Rose thinks Knicks could go undefeated and he has officially lost his mind

Boeheim coached Anthony to the 2003 National Championship where the Orange won and he said that his best chance to win a title was if he had signed with the Chicago Bulls in the summer of 2014. That would have been a team that was already great on defense getting someone who could actually go out and get his own buckets, which could not be said for the rest of the team at the time.