The NBA playoffs are here, which means it's time to glue yourself to the court.

This is how Alicia Santurio kicked off her postseason. Santurio became a trending topic on social media when she glued herself to the court during the second quarter of a NBA Play-In Tournament game between the Minnesota Timberwolves and Los Angeles Clippers. Thus, earning the nickname "Glue Girl."

The Timberwolves issued a press release after Santurio's protest during the Tuesday night NBA game in Minneapolis:

"A fan disruption occurred during the second quarter of tonight's game. We are in touch with Target Center Security to address the incident."

Four days later, another protestor, 19-year-old animal activist Zoe Rosenberg chained herself to the hoop during Minnesota's first-round game against the Memphis Grizzlies. What was going on?

The answer can be found on their t-shirts.

Why Are People Protesting at Timberwolves Games? 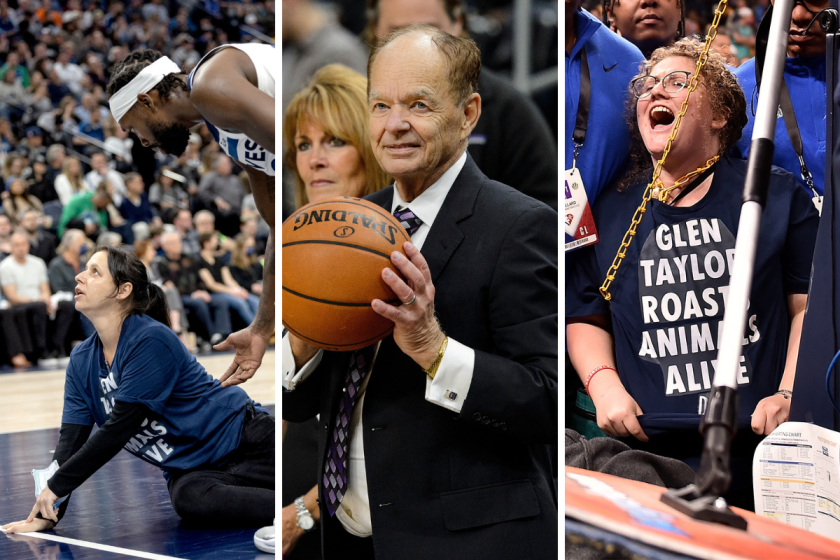 RELATED: Donkey Basketball: The Cruel Reality of a Historic Fundraiser

"Glen Taylor Roasts Animals Alive." Santurio and Rosenberg's shirts donned this statement during their respective protests, but what does it mean?

First, we have to meet Glen Taylor. Taylor is a businessman with a reported net worth of $2.6 billion who has owned the Minnesota Timberwolves since 1994. However, his time as the Wolves owner is coming to an end. Taylor sold the team to MLB legend Alex Rodriguez and billionaire Marc Lore in 2021, and the duo is set to take over in 2023.

Anyway, one of Taylor's businesses is Rembrandt Enterprises -- a factory egg farm in Iowa. Direct Action Everywhere, an animal rights group which Santurio is an investigator for, reported Taylor's farm orchestrated a mass killing of 5.3 million chickens due to an avian flu outbreak. The method used to put down the chickens is a ventilation shutdown called VSD+, a system in which barn ventilation is turned off and suffocates the animals, per the Storm Lake Times Pilot. Although ventilation shutdown has caught flack from animal rights groups such as Direction Action Everywhere, the United State Department of Agriculture said in January that it's considered effective to kill all birds in an infected facility within 24 to 48 hours of a presumed positive bird flu test.

I superglued down to the basketball court to bring attention to the mass killing of chickens at glen taylors factory farm using vsd #Gluegirl https://t.co/m0trPvqZGs

Proud to be #ChainGirl. Protesting can be scary, but being silent and continuing to live in a world where animals are abused and killed is even scarier. #Timberwolves #NBAPlayoffs #ChainLady #GlenTaylor pic.twitter.com/DE7hKIukzA

As a result, Direct Action Everywhere (DxEverywhere for short) has requested Taylor's transfer of the Wolves to Rodriguez and Lore be expedited.

"There's no symbolic thing going on, more of a means to create enough of a disturbance that will be notable and people will talk about in creating buzz," said DxE press coordinator Matt Johnson.

Santurio was issued a trespass notice while Rosenberg was arrested and charged with disorderly conduct and criminal trespassing. Rosenberg was released on $2,500 and appeared in her initial court hearing on Monday.

The in-game protests took the Internet by storm, but for Rosenberg, it was another day at the office. 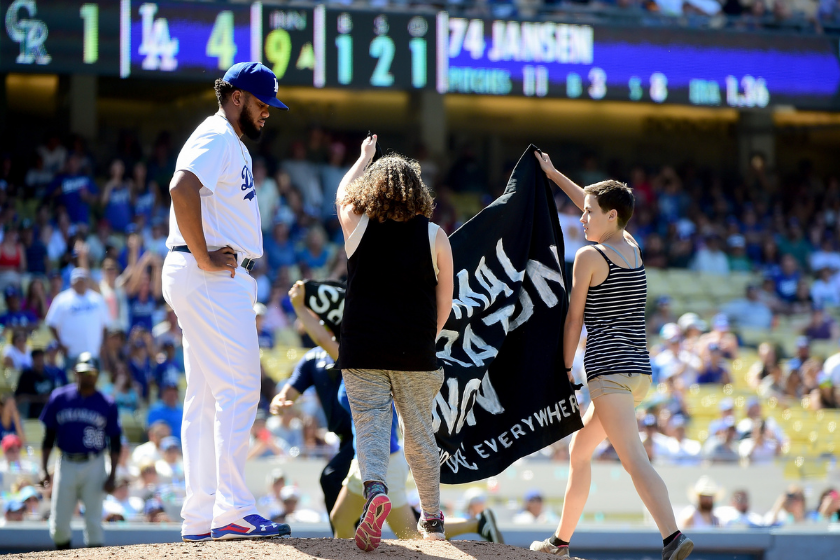 Rosenberg has been an animal rights activist since she founded Happy Hen, an animal sanctuary that gives refuge to abused and abandoned farm animals when she was 11.

She protested "Dodger Dogs" at a Los Angeles Dodgers game in 2016 by walking onto the pitcher's mound in the middle of the contest. The protest was in regards to the treatment of the animals in relation to the concession item.

She also ran onto the field at the 2019 college football national championship game between Alabama and Clemson, where she was protesting Levi Stadium's ties with a poultry producer who allegedly abused animals.

I have a feeling Rosenberg's Memphis stunt won't be the last we see of her.