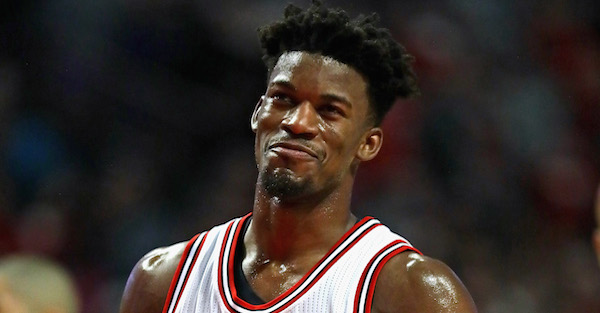 Jimmy Butler, one of the most sought after trade targets this off-season, is on the move.

In a blockbuster deal, the Chicago Bulls are sending Butler and the 16th pick to Minnesota in exchange for seventh pick, Zach LaVine, and Kris Dunn.

The Bulls have agreed in principle to deal Jimmy Butler to the Timberwolves, per source.

Chicago is finalizing a deal to send Jimmy Butler to Minnesota for Zach LaVine, Kris Dunn and No. 7 pick, league source says.

Wolves with get the No. 16 pick from Bulls in Jimmy Butler deal, sources said

The Chicago Bulls plan to select Lauri Markkanen with the No. 7 pick, league sources tell @TheVertical.

Butler is a three-time All-Star, and he had been one of the most sought after trade targets in the NBA for the past year. Butler averaged 23.9 points, 6.2 rebounds, and 5.5 assists this past year, and he could potentially turn Minnesota into a playoff contender.

The deal could prove to be risky for the Chicago Bulls. Trading up for the seventh pick in the 2017 Draft is a solid move, but LaVine is coming off a torn ACL and likely won’t be ready at the start of the NBA season. There will also be questions if the two-time Dunk Contest winner can will be able to regain the athleticism that helped turn him into an efficient scorer last season.

Dunn was the fifth pick of the 2016 NBA Draft out of Providence. Minnesota moving him seems to signal that the Wolves are sticking with starting point guard Ricky Rubio for the foreseeable future.