Kobe injures his finger, uses it to flip reporters the bird 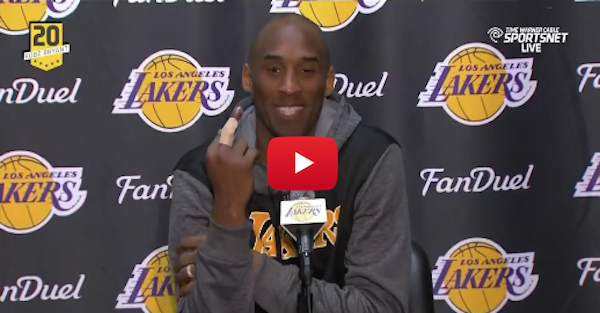 Kobe Bryant is on his farewell tour and he doesn’t really have to cater to anyone’s needs and he knows it. He can be as rude or funny or awful as he wants to be and no one will say anything. He took full advantage Friday night after injuring his middle finger against the San Antonio Spurs.

In the postgame press conference he showed all of the reporters his injury and in doing so, totally flipped them all off.

Despite the losses @kobebryant hasn't lost his sense of humor. KB24 updates us on the condition of his middle finger pic.twitter.com/VvAag73rB6

Of course no one is going to bat an eye at this because he’s the Black Mamba and he’s retiring. He can get away with whatever he wants, but at least he was funny about it rather than being a huge jerk like he definitely has been in the past.