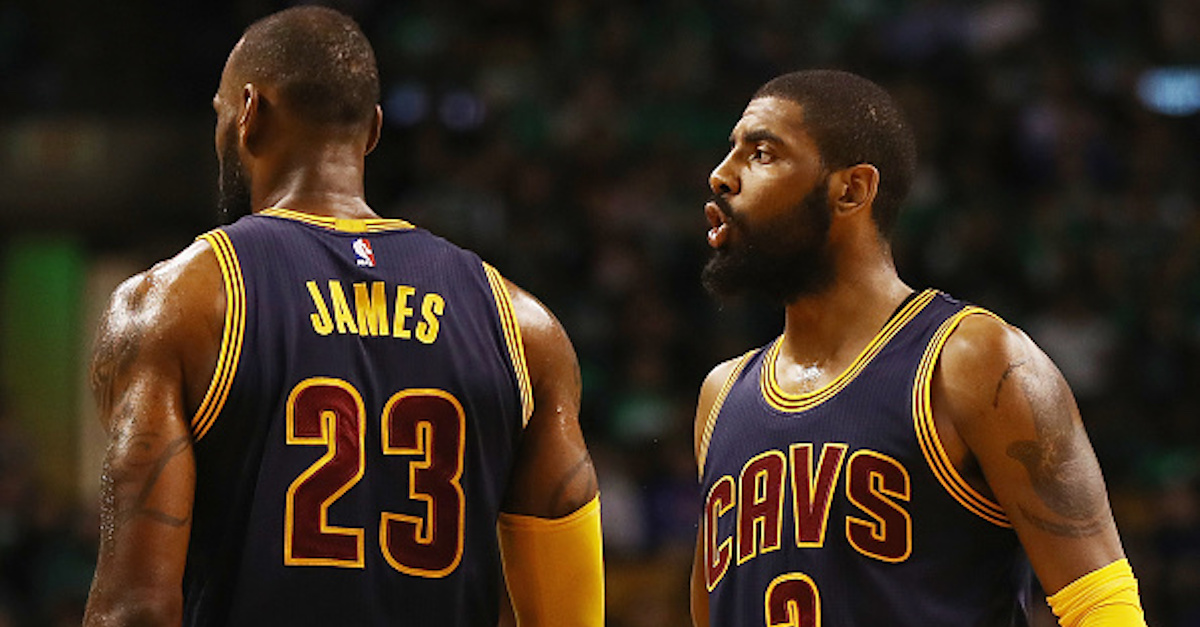 Elsa/Getty Images
BOSTON, MA - MAY 25: Kyrie Irving #2 of the Cleveland Cavaliers reacts in the first half against the Boston Celtics during Game Five of the 2017 NBA Eastern Conference Finals at TD Garden on May 25, 2017 in Boston, Massachusetts. NOTE TO USER: User expressly acknowledges and agrees that, by downloading and or using this photograph, User is consenting to the terms and conditions of the Getty Images License Agreement. (Photo by Elsa/Getty Images)

The Cleveland Cavaliers are looking at a future in limbo — especially when it comes to the future of Kyrie Irving — but they reportedly had the opportunity to make a big-time deal and passed up on it.

According to ESPN super reporter Adrian Wojnarowski the Indiana Pacers were interested in trading their own superstar ready to walk, Paul George, in a one-for-one trade for Irving. Here’s what Woj said:

Wojnarowski recently wrote a pretty in-depth piece on Irving and his desire to be traded away from Cleveland. Among some of the tidbits in the article were other teams investigating Irving as both a person and player — digging into his past as well as some of his off-court habits — but the big thing that stood out was a straight-up trade deal that Cleveland reportedly denied multiple times.

There was also a three-team trade on the table that would have seen Kevin Love sent to Denver, Gary Harris to Indiana, and George to Cleveland, but that fell apart for numerous reasons and the Pacers eventually made the deal that sent George to Oklahoma City for Victor Oladipo and Domantas Sabonis.

Still, most intriguing from this report is the fact that we could have seen a mega trade between Cleveland and Indianapolis — two in-conference rivals. Irving would have gone to the Pacers to be their lone superstar and George to the Cavaliers, to play second-fiddle to LeBron James.

Cleveland would have had to work on getting George signed on long-term, which is potentially why that deal didn’t go through. But had the Cavs been able to do that — they likely would have had the hottest one-two punch in the NBA.

Now, they’re looking at a future that likely won’t include Irving, or perhaps any true superstar depending on what James decides to do once his deal runs out next summer.