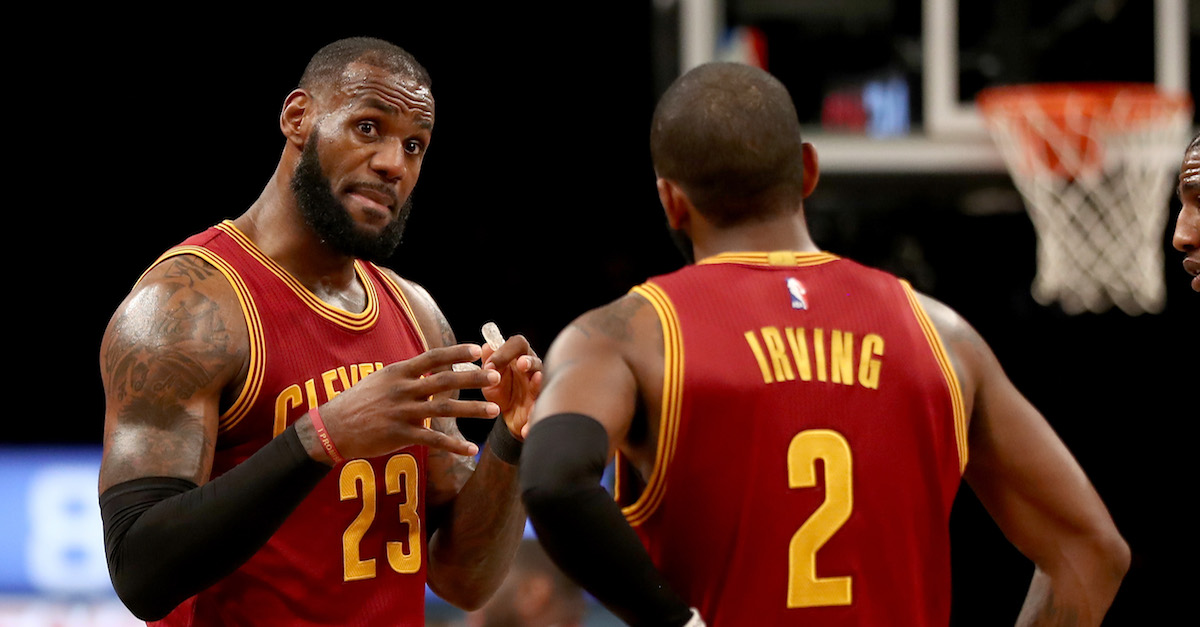 Elsa/Getty Images
NEW YORK, NY - JANUARY 06: LeBron James #23 and Kyrie Irving #2 of the Cleveland Cavaliers talk during a time out against the Brooklyn Nets at the Barclays Center on January 6, 2017 in the Brooklyn borough of New York City. NOTE TO USER: User expressly acknowledges and agrees that, by downloading and or using this Photograph, user is consenting to the terms and conditions of the Getty Images License Agreement. (Photo by Elsa/Getty Images)

Kyrie Irving’s trade to the Boston Celtics after his request of a move from the Cleveland Cavaliers was arguably the biggest storyline of the NBA offseason.

He spoke to that on ESPN’s First Take Monday morning and gave the coldest response on if he talked with former teammate LeBron James ahead of talking with the Cavaliers front office:

.@KyrieIrving on why he didn't inform LeBron James that he wanted out of Cleveland. pic.twitter.com/WF9GlCA54o

He’s going to be a perfect Celtic.

Reports surrounding the relationship between LeBron James and Kyrie Irving has devolved into something nasty since news broke of the latter requesting a trade.

ESPN’s Stephen A. Smith reported on his podcast about the issues between James and Irving (H/T B/R):

Windhorst went on to say that LeBron James was “blindsided and disappointed” by the request.

Irving reportedly made the request to Cavaliers owner Dan Gilbert and expressed that he wanted to play in a situation where he can be more of a focal point and that he no longer wanted to play alongside LeBron James, according to ESPN’s sources.

According to Stephen A. Smith, Irving’s camp believes James leaked the trade request, via Complex:

LeBron James has a no-trade clause

LeBron James preparing for an exit?