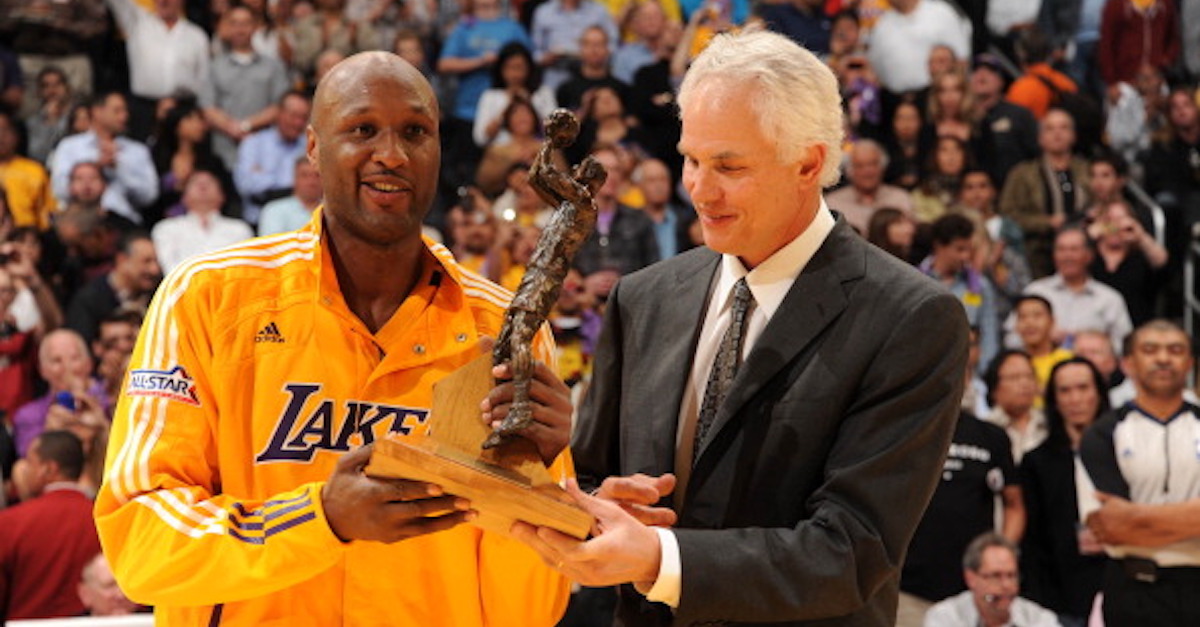 Photo by Andrew D. Bernstein/NBAE via Getty Images
LOS ANGELES, CA - APRIL 20: General Manager Mitch Kupchak of the Los Angeles Lakers presents Lamar Odom #7 with the 2011 Sixth Man of the Year Kia Performance Award before taking on the New Orleans Hornets in Game Two of the Western Conference Quarterfinals in the 2011 NBA Playoffs at Staples Center on April 20, 2011 in Los Angeles, California. NOTE TO USER: User expressly acknowledges and agrees that, by downloading and/or using this Photograph, user is consenting to the terms and conditions of the Getty Images License Agreement. Mandatory Copyright Notice: Copyright 2011 NBAE (Photo by Andrew D. Bernstein/NBAE via Getty Images)

Lamar Odom liked being part of the Los Angeles Lakers, that much is clear.

Odom, who’s been retired from the NBA for a hot minute now, played in Los Angeles from 2004 to 2011. He was an integral piece of what the Lakers were able to accomplish during that stretch and he won two championships with the organization — one in 2009 and the other in 2010.

He was the league’s sixth man of the year in 2010-11 but was promptly traded to the Dallas Mavericks after a playoff exit. That’s a trade that still puzzles Odom. In fact, he tells Shams Charania of The Vertical that the trade away from L.A. ended his career.

?That trade from the Lakers basically ended my career and purpose,? Odom told The Vertical. ?I was never really myself ever again. Being in L.A., the structure, the people I knew, it hurt leaving. I had great memories with the Lakers, with Kobe and Pau. That was a special time in my life.

?I think about it all the time, about how much I had left in the tank. I had issues going on. But barring injury, could I play in the NBA today? I could play. I should still be playing.?

It’s rather obvious that the trade still haunts Odom. His numbers dropped off significantly and at that point, he became a journeyman. He played in Dallas for a year before heading back to Los Angeles, but this time with the Clippers. He also spent a year in the Euroleague and a final season with the New York Knicks.

He was never able to recapture that mojo, though, and it’s interesting to see that he believes it’s all because he left what was ultimately a tremendous situation with the Lakers.