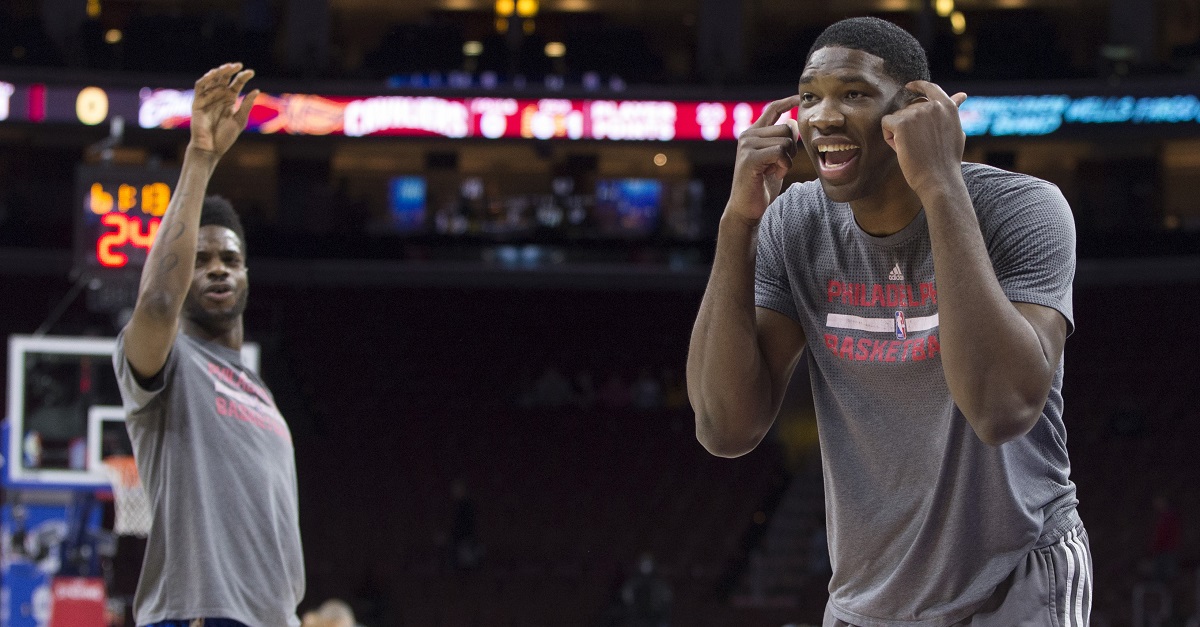 Mitchell Leff/Getty Images
PHILADELPHIA, PA - JANUARY 10: Joel Embiid #21 of the Philadelphia 76ers has fun with Nerlens Noel #4 during warm ups prior to the game against the Cleveland Cavaliers on January 10, 2016 at the Wells Fargo Center in Philadelphia, Pennsylvania. NOTE TO USER: User expressly acknowledges and agrees that, by downloading and or using this photograph, User is consenting to the terms and conditions of the Getty Images License Agreement. (Photo by Mitchell Leff/Getty Images)

Philadelphia 76ers center Joel Embiid and LaVar Ball have had an ongoing feud since draft night, and it continued after Embiid called out Ball on a recent Instagram Live video.

Embiid and teammate Ben Simmons tweeted about Ball on draft night after the latter said his son, Lonzo, would take the Lakers to the playoffs in the upcoming season.

Please dunk on him so hard that his daddy runs on the court to save him.. https://t.co/cMvt5RYiSQ

LaVar was asked about Embiid and Simmons’ tweets, and he called out Embiid on 97.5 The Fanatic.

“When you don’t win, and don’t even make the playoffs, and don’t even stay on the court long enough, that’s the best thing you can do – is tweet and make some stuff,” Ball said. “Ain’t nobody else doing that, because they’re working on their games in the gym. These guys ain’t played a game, always hurt, and [are] at the bottom of the totem pole. So guess what? Get your ass off the g*****n Twitter, and get in the gym.”

Of course Embiid was asked about Ball’s comments, and he had a very simple response on Instagram Live: F**k LaVar Ball.

Embiid just gets straight to the point. There’s a good chance these two aren’t finished exchanging words. The two meetings between the Philadelphia 76ers and the Los Angeles Lakers should be a lot of fun this season.