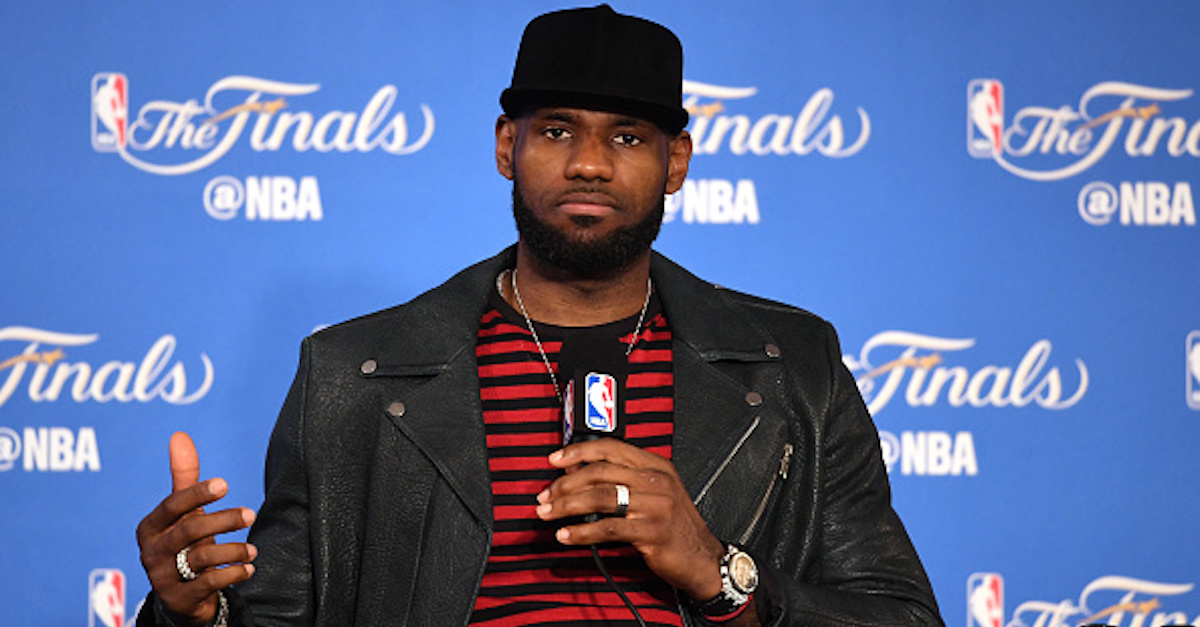 Thearon W. Henderson/Getty Images
OAKLAND, CA - JUNE 12: LeBron James #23 of the Cleveland Cavaliers speaks at the press conference after his teams 129-120 loss to the Golden State Warriors in Game 5 of the 2017 NBA Finals at ORACLE Arena on June 12, 2017 in Oakland, California. NOTE TO USER: User expressly acknowledges and agrees that, by downloading and or using this photograph, User is consenting to the terms and conditions of the Getty Images License Agreement. (Photo by Thearon W. Henderson/Getty Images)

LeBron James may be the best basketball player of all time and in fact, there’s a good case to be made that he’s one of the best well-known people in the world at the moment.

James’ following is as social as it is centered around his talent on the basketball court — he’s a brand, after all — and he just took a shot and another well-known public figure who is known as much for his brand as anything else: The President of the United States.

President Donald Trump recently ruffled some feathers in the aftermath of the tragedy in Charlottesville by mentioning George Washington and Thomas Jefferson and the fact that they were slave owners. He was talking about the hot button issue of Confederate-era statues being taken down and was wondering aloud whether or not statues of two of America’s founding fathers should be torn down as well.

In today’s highly polarized political and social culture it was perhaps an errant statement from Trump, who was shooting off the cuff at a press conference. It certainly drew the ire of his opponents, one of which is apparently James.

Here’s what James had to say on Twitter in response to Trump’s remarks.

Hate has always existed in America. Yes we know that but Donald Trump just made it fashionable again! Statues has nothing to do with us now!

James was far from the only athlete or sports figure to speak out against Trump, but he’s certainly probably the most high profile athlete.

To put this in context, this would be like Tom Brady or Aaron Rodgers calling out the President by name on social media. If you want to stick to basketball for comparison’s sake, it would be like Michael Jordan calling out Ronald Reagan or George Bush.

This is a big deal, especially considering the number of people who follow James off the court. He has the ability to start a social movement with just one Tweet if he felt like it, and at the very least, the fact that he’s taken a strong stance against the President’s words is very noteworthy.

Perhaps it won’t change anything, but that’s one very loud and prominent voice speaking out.