LeBron James takes his shots at everybody in victory parade speech 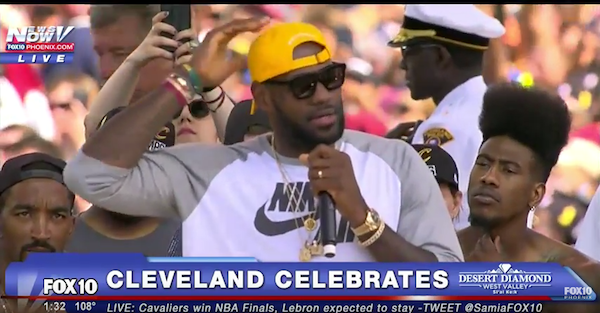 The Cleveland Cavaliers are NBA champions and so they had their parade on Wednesday after winning Game 7 on Sunday. He had a triple-double and was named the unanimous MVP of the series.

It was only right he got the most mic time on the parade float and boy did he take advantage of it. He talked for 16 minutes off the cuff, with no notes or anything and got a jab in on just about everyone he could.

He made sure all of his teammates got the praise too and for those keeping up with the J.R. Smith updates, he was still not wearing a shirt for this one. James Jones also got a nice shout out for riding LeBron’s coattails and Dahntay Jones even got a shout out for getting picked up just weeks before the playoffs started. Just some stunning stuff.