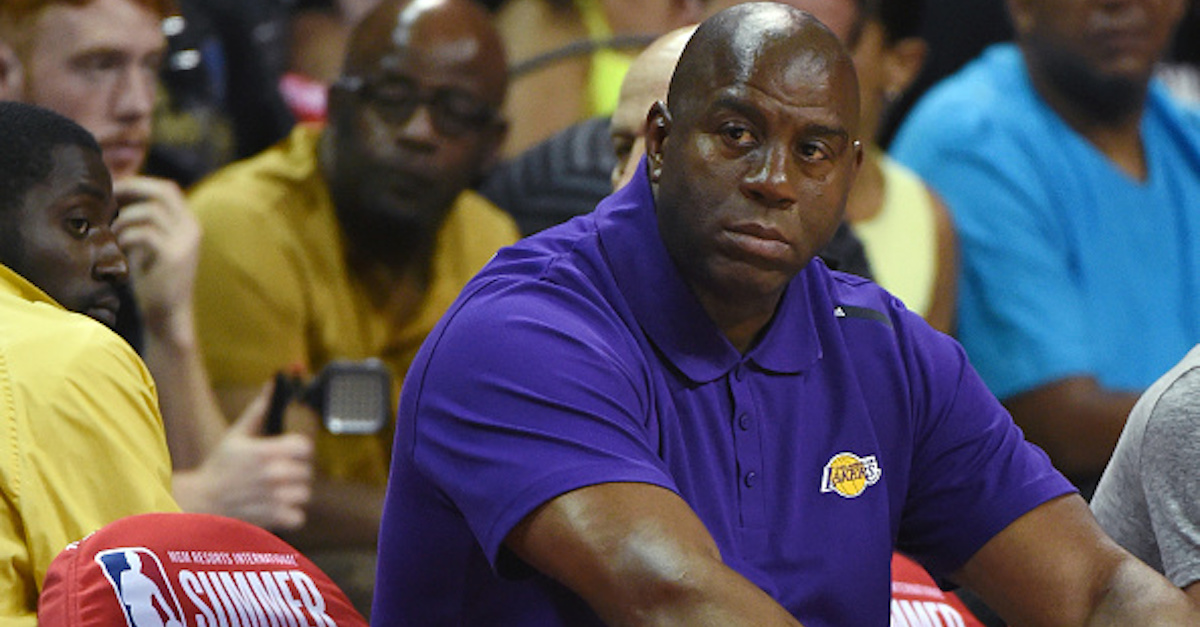 Ethan Miller/Getty Images
LAS VEGAS, NV - JULY 08: Los Angeles Lakers president of basketball operations Earvin "Magic" Johnson watches the Lakers take on the Boston Celtics during the 2017 Summer League at the Thomas & Mack Center on July 8, 2017 in Las Vegas, Nevada. Boston won 86-81. NOTE TO USER: User expressly acknowledges and agrees that, by downloading and or using this photograph, User is consenting to the terms and conditions of the Getty Images License Agreement. (Photo by Ethan Miller/Getty Images)

The Los Angeles Lakers are apparently looking at the bigger picture as it pertains to their rebuilding project.

While the franchise could still pursue all three players, recent factors have led to a possible change in plans.

Cousins is currently dealing with a torn Achilles tendon. George, a SoCal native who many believed would sign with Los Angeles after the 2017-18 season, has suggested to ESPN’s Rachel Nichols that Oklahoma City has an advantage in re-signing him. James is reportedly only interested in joining the Lakers if he can do so with an established star, rather than the young talent that currently makes up the team’s nucleus.

But that same roster could me more enticing for an elite player during the next free agency period with the likes of Brandon Ingram, Lonzo Ball, Kyle Kuzma and Josh Hart having an additional season to develop in 2018-19.

The free agency plan could also have a major short-term impact, with Los Angeles being less inclined to unload contracts during Thursday’s trade deadline. Former lottery pick Julius Randle — who will be a free agent next season — and backup guard Jordan Clarkson — who is owed $25.9 million during the next two seasons — were rumored to be on the trading block leading up to the deadline, according to ESPN’s report.

However, both players have improved during the past month, with Clarkson averaging 15.9 points and a 46 percent from the field, while Randle has scored 15.3 points and nine rebounds per game since reclaiming his starting role.

The Lakers, who currently rank 11th in the Western Conference, have won 10 of their last 14 games, which included a five-game winning streak, an 11-day road trip and 10 games without Ball, the team’s first-round draft pick and starting point guard.

That stretch is the best the franchise has had since 2013, which obviously brings plenty of optimism that the rebuilding project is starting to take shape.