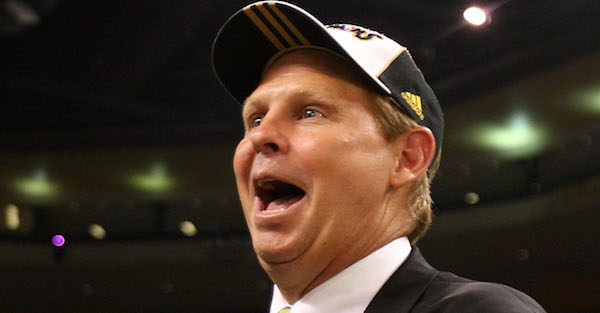 Elsa/Getty Images
of the Los Angeles Lakers of the Boston Celtics in Game Five of the 2008 NBA Finals on June 17, 2008 at TD Banknorth Garden in Boston, Massachusetts. The Celtics defeated the Lakers 131-92 to win the NBA Championship. NOTE TO USER: User expressly acknowledges and agrees that, by downloading and/or using this Photograph, user is consenting to the terms and conditions of the Getty Images License Agreement.

The Boston Celtics are swinging for the fences in the day leading up to the trade deadline, reportedly targeting Chicago Bulls star Jimmy Butler.

NBA TV’s David Aldridge is reporting that talks are very real (to him) between the Celtics and Bulls, and the main sticking point is on Jae Crowder.

He’s the guy the Bulls are reportedly insisting on in any package. Chicago’s ideal package reportedly includes a starting-caliber player and a top-half-of-the-lottery pick.

Celtics general manager on the other hand, would like to keep Crowder, Avery Bradley and Marcus Smart to balance the offensive firepower of Isaiah Thomas, Al Horford and Butler.

Yahoo!’s Adrian Wojnarowski previously pointed out the main part in a potential Butler swap is one (probably not both) of the 2017, ’18 Brooklyn Nets picks the Celtics currently hold.

The 2017 selection could be as high as the top overall pick as Brooklyn is at the bottom of the NBA standings. Getting that pick could ensure the Bulls replace Derrick Rose with a franchise guard in Washington?s Markelle Fultz or UCLA?s Lonzo Ball.

The Celtics tried to trade for Butler at the deadline last season, and they unsuccessfully tried again during the 2016 NBA Draft.

Earlier reports had the teams discussing options that Boston could move, which include guard Marcus Smart, forward Jae Crowder and the 2017 and 2018 Nets picks.