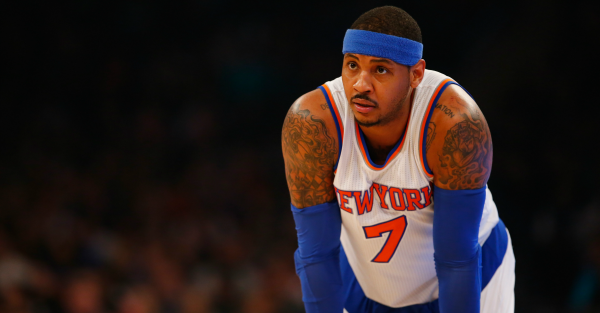 New York Knicks star forward Carmelo Anthony told reporters Wednesday that he would like to have more input on potential hires for the team. Kurt Rambis is the interim head coach right now and it seems Knicks President Phil Jackson is pushing to keep him on as the permanent coach to run his triangle offense.

“I like Kurt,” he said. “I thought he was kind of thrown into a tough situation with the firing of [Fisher] and kind of gathering the troops, getting guys to play and finish the season up. As far as what’s going to happen this summer, this offseason and next year, who’s going to be in that spot, I have no idea. I haven’t had any conversations with anybody about that. I’m pretty sure they’ll address that when the offseason comes.

“I would love to have some type of input when it comes to that. But like I said, nobody has had a conversation about that yet.”

Melo having some say in this decision is only logical and it’s not like the Knicks would be giving him complete power almost like LeBron has in Cleveland. There’s really just no reason to keep Rambis around as head coach. He has one winning season ever as a head coach and that was in the lockout-shortened 1998-99 season. His Lakers were bounced in the second round of the playoffs and he has never had a season with more than 17 wins after that.

Giving Melo some input on the decision would make him feel involved at the very least and if it doesn’t turn out well the team has an out and can put some of the blame on Anthony. Melo probably doesn’t want to run triangle a whole lot either so that would almost certainly knock Rambis out of the race.