Memphis coach breaks down in tears after Spurs sweep Grizz 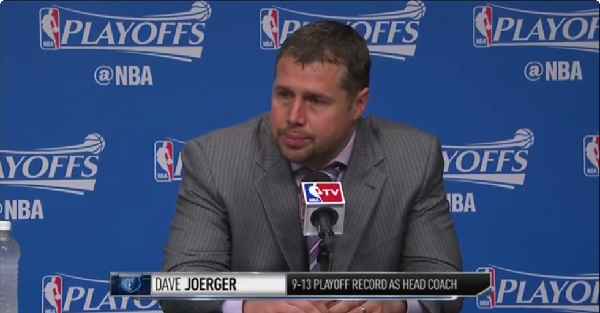 There are coaches in the NBA who take the job for the money and accolades. Then there are the guys like Memphis’ Dave Joerger. He had to coach this team through some of the worst adversity a team has ever seen. He had to play 28 different players because of all the injuries his starters and even bench guys suffered all season.

Marc Gasol was lost for the rest of the season in February, Zach Randolph was out for a bit, Mike Conley had season-ending surgery and almost all of the role players had an injury at one point. Joerger connected with this team and while they were the 5-seed for most of the season it was a miracle they ended up in the playoffs at all as the 7-seed.

The Grizzlies ended up getting swept by the San Antonio Spurs because there just wasn’t enough firepower, but Joerger enjoyed the ride and he will never forget this season even if it ended in disappointment.

An emotional Dave Joerger on the veteran leadership of Matt Barnes & Vince Carter…https://t.co/JZpSbCWNly

Now that is a coach who clearly cares about his team. That’s also a coach you keep around for the long haul. If he can make magic with that group of rag tag players then he can certainly get a higher seed when the team is at full strength. Hopefully they come back stronger after this.