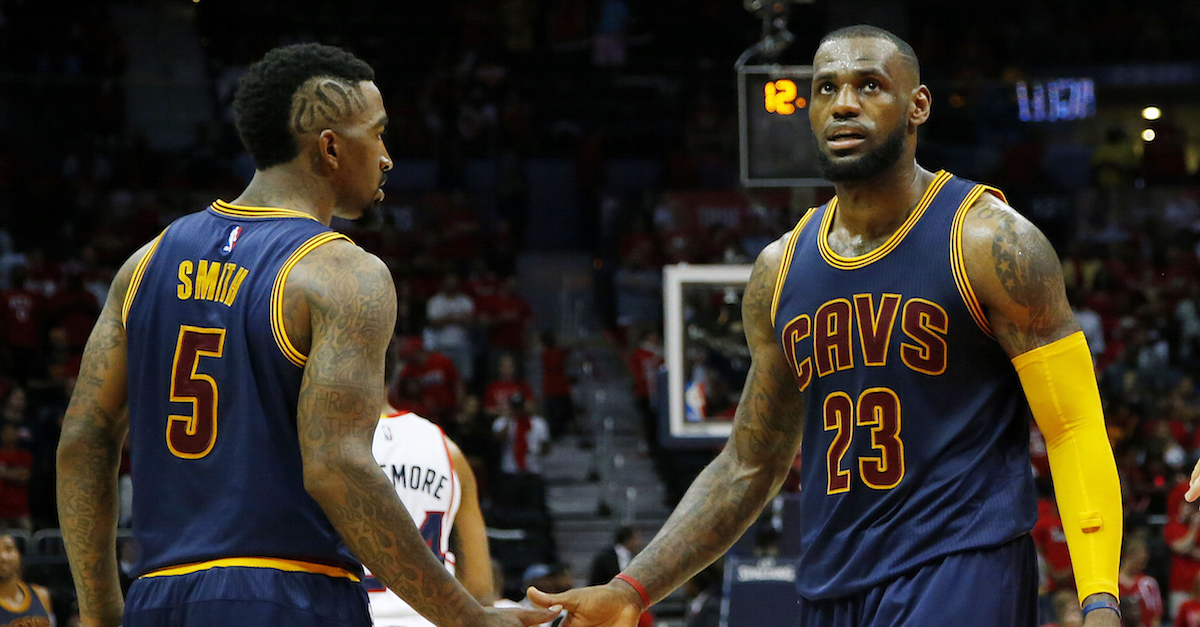 ATLANTA, GA - MAY 20: LeBron James #23 and J.R. Smith #5 of the Cleveland Cavaliers react after Iman Shumpert #4 drew a foul in the second half against the Atlanta Hawks during Game One of the Eastern Conference Finals of the 2015 NBA Playoffs at Philips Arena on May 20, 2015 in Atlanta, Georgia. NOTE TO USER: User expressly acknowledges and agrees that, by downloading and or using this Photograph, user is consenting to the terms and conditions of the Getty Images License Agreement. (Photo by Kevin C. Cox/Getty Images)

The Cleveland Cavaliers rolled into the Eastern Conference Finals for the first time since 2008-09 Wednesday night against the Atlanta Hawks.

It?s a much different team than the one James led to the Conference Finals during his first stint with the Cavaliers. Kyrie Irving, Kevin Love and James were supposed to form the Cleveland Big 3. Love is out for the postseason and Irving is banged up, but role players are stepping up at the right time for the Cavaliers. Wednesday evening, it was guys the team acquired during the season that made the difference.

Iman Shumpert (a stout defender and explosive scorer) and JR Smith (who could change games in opposite directions whether he was knocking down 30-foot shots or throwing elbows and getting ejected) were shipped off from the wreaked New York Knicks. Add Timofey Mozgov to the mix, and you?ve got a significantly upgraded roster from what the Cavaliers looked like on Opening Night.

As Cleveland drudges through the team?s injury-plagued postseason, it?s guys like Mozgov, Shumpert and Smith whose games are embellished next to James.

James did his thing (31 points, 8 rebounds, 6 assists), but the Cavaliers don?t leave Game 1 with the win without the trio of midseason acquisitions.

Shumpert played suffocating defense on Kyle Korver, moving swiftly around the perimeter to follow the sharpshooter. Korver refused to force the shot, but hesitated often and opted not to take the bad attempt. He finished with nine points on five shots, including 2-for-4 on 3-point attempts.

Mozgov?s size and rebounding ability gave Cleveland a 49-37 advantage on the boards. Mozgov and Tristan Thompson combined for 21 of those rebounds, including nine offensive. The duo also chipped in 24 points against Atlanta?s All-Star big men, Paul Millsap and Al Horford.

And then there was J.R. Smith, whose 28 points were a postseason career-high. He knocked down eight triples and had eight rebounds, showing versatility on both ends of the floor. They weren?t easy looks either. Off the dribble, with a hand in his face or in transition, Smith looked for, and found, his shot often.

And now the Atlanta Hawks are down one of, if not the team?s most important player in this series ? DeMarre Carroll.

Atlanta will make adjustments, and there?s certainly no stopping James all together. But keying in on the secondary options, with Kyrie Irving obviously injured, is imperative for the Hawks to make this a series. Game 2 is Friday night at Philips. Expect Atlanta to come out with fight right off the tip.