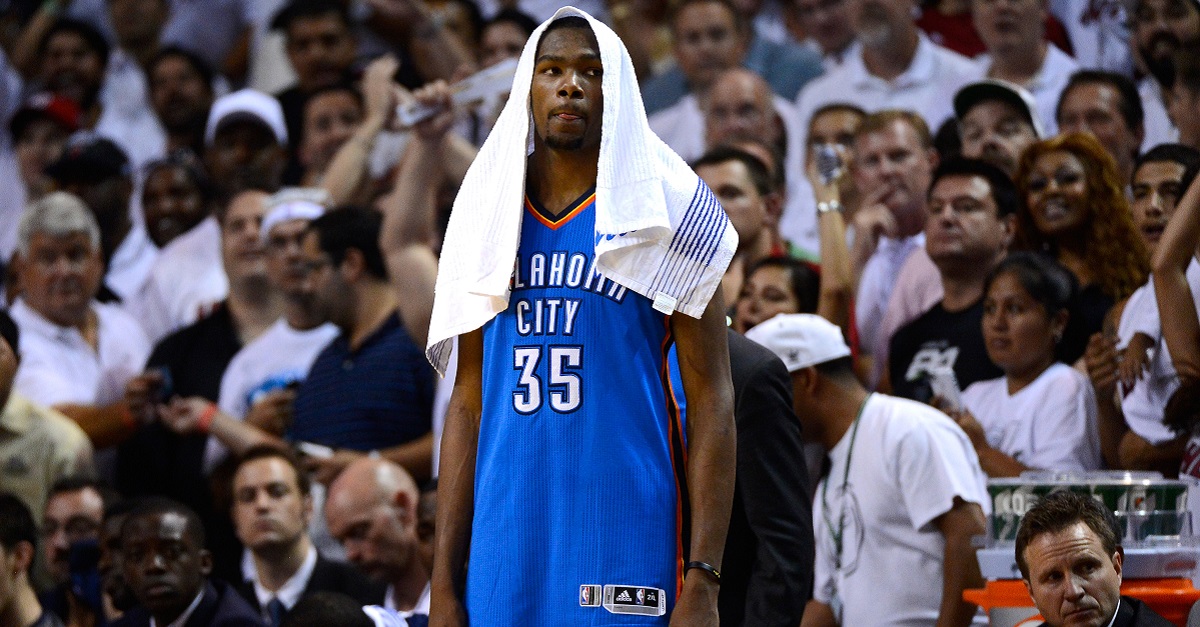 MIAMI, FL - JUNE 21: Kevin Durant #35 of the Oklahoma City Thunder looks on dejected late in the fourth quarter against the Miami Heat in Game Five of the 2012 NBA Finals on June 21, 2012 at American Airlines Arena in Miami, Florida. NOTE TO USER: User expressly acknowledges and agrees that, by downloading and or using this photograph, User is consenting to the terms and conditions of the Getty Images License Agreement. (Photo by Ronald Martinez/Getty Images)

There’s not a whole lot of love left for Kevin Durant in Oklahoma City now after his departure to become a Golden State Warrior. That might explain why stores are desperately trying to get rid of any merchandise that has his name on it.

How desperate were they? They almost gave his stuff away for free! There was a 99 percent markdown all the way to under a dollar! ESPN’s Darren Rovell was on the hunt and found this ridiculous price for a replica jersey:

Some other stores showed their disdain for Durant’s departure in another fashion:

Another Durant liquidation sale offer in OKC (via @BrookingKeith) pic.twitter.com/UNCbyMgKT0

It looks like all those fans who burned their jerseys might have actually made out pretty well considering they could have gotten another one for less than a dollar at some places. The stores probably could have donated this stuff to Goodwill or another charity and done a lot better than just essentially giving away some of their best stuff.