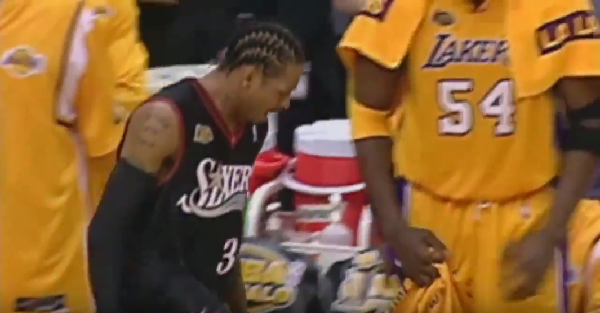 Fifteen years ago on June 6, 2001 the Philadelphia 76ers stole a game away from the Los Angeles Lakers in the NBA Finals with a 107-103 score. Those Lakers would go on to win the series 4-1 and win another ring for their three-peat that featured Shaquille O’Neal and Kobe Bryant. However, that first game was all about the smallest guy on the court, Allen Iverson.

RELATED: A.I. will get his place in the HOF sooner than expected

A.I., or “The Answer” if you prefer nicknames, lit up the Lakers for 48 points, five steals, six assists and five rebounds in Game 1. However, it’s not the stats that everyone remembers. It’s the moment in overtime when Iverson crossed up Lakers guard and current Cavaliers coach Tyronn Lue and made him fall to the ground. Not only that, he stepped right over him and gave him the meanest stare down in Finals history.