One of the NBA’s most brittle and mercurial players wants a $150 million max deal, and that could be a hard sell 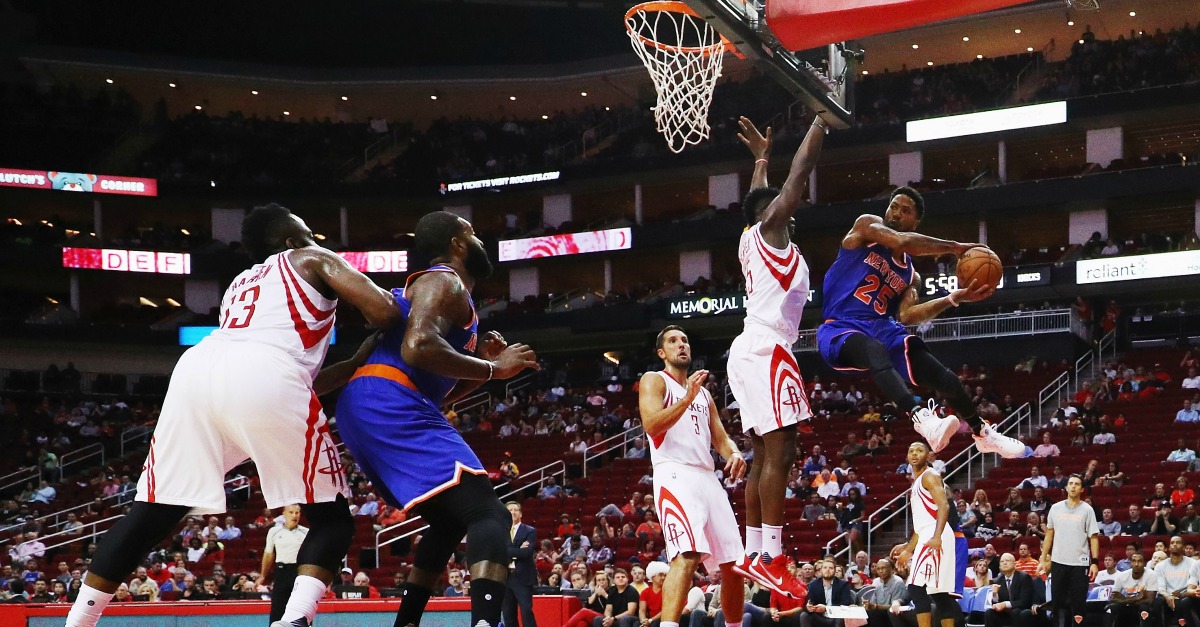 Scott Halleran Getty Images
James Harden #13 of the Houston Rockets battles for the basketball with Carmelo Anthony #7 of the New York Knicks during their game at the Toyota Center on October 4, 2016 in Houston, Texas. NOTE TO USER: User expressly acknowledges and agrees that, by downloading and or using this Photograph, user is consenting to the terms and conditions of the Getty Images License Agreement.

If the New York Knicks want to keep Derrick Rose, it looks like they’ll have to write a very large check:

YIKES! Yes, Rose has had a resurgent year, but he also has his share of issues.

In addition to the bumps and sprains any pro athlete suffers through, Rose has had far more serious problemsand has been fairly fragile during his career. He tore an ACL in April 2012 and didn’t make in back in the court until October 2013. That return was short lived, because 10 games into the season, he tore the meniscus in his other knee, forcing him to miss the rest of that season. In 2015, he re-tore the meniscus and had to  miss 20  games. Then he fractured his left orbital bone in 2015 during the pre-season but was available on opening day.

Yes, so far this season, Rose has been healthy and he looks like his old self, cutting to the basket with abandon and finding open teammates when his lane closes. He’s averaging 17.3 PPG and 4.5 assists. The reeling Knicks — who, at 17-21, have lost eight of 10 games and fallen to 11th seed in the NBA’s Eastern Conference — have been without Rose for five games this season and lost four of them.

But there have also been lingering concerns about Rose’s attitude — even before he pulled a disappearing act and didn’t show up for Monday’s game against the New Orleans  (a family emergency, he later said). He’s been criticized as a “me-first” player, and he took a media beating when he gave a quote that indicated he wasn’t about leaving it all on the court:

Rose, unprompted, brings up his free agency two years from now. "All the money that's being handed out. I know my day is coming."

Some teams will question whether Rose still burns to  be great, especially after reports that said he considered giving up basketball when he was on his short hiatus from the Knicks. Of course, $150 million has a way of curing a lot of ills.

Will the Knicks looks to resign him? A report in the NY Daily News says Rose’s relationship with the Knicks has eroded as a result of him leaving and not telling anyone.

There’s still plenty of time until free agency, and plenty of time for teams to decide whether they want to invest all that money in a 28-year-old, oft-injured and mercurial player.