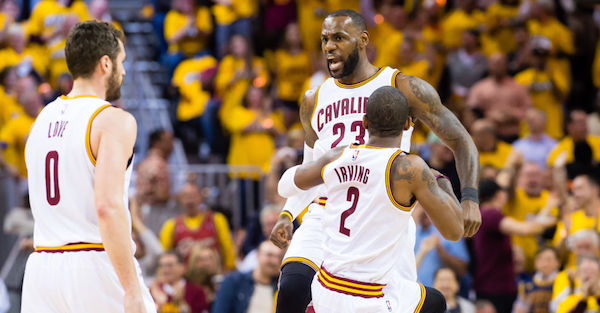 Jason Miller/Getty Images
CLEVELAND, OH - MAY 1: LeBron James #23 celebrates with Kyrie Irving #2 and Kevin Love #0 of the Cleveland Cavaliers after scoring during the first half of Game One of the NBA Eastern Conference semifinals against the Toronto Raptors at Quicken Loans Arena on May 1, 2017 in Cleveland, Ohio. NOTE TO USER: User expressly acknowledges and agrees that, by downloading and or using this photograph, User is consenting to the terms and conditions of the Getty Images License Agreement. (Photo by Jason Miller/Getty Images)

The Cleveland Cavaliers, Indiana Pacers and Denver Nuggets have reportedly discussed huge, three-team deal that would send Paul George to the Cavaliers and Kevin Love to the Denver Nuggets, according to ESPN’s Marc Stein.

League sources: Cavs, Pacers and Nuggets have discussed a three-way deal that would land Paul George in Cleveland and Kevin Love in Denver

The Cavaliers, according to the report, are still trying to trade for George, even without a current general manager in place with the departure of David Griffin, but this round of trade talks reportedly took place prior to the NBA Draft.

The specifics of the deal, outside of Love going to Denver and George going to Cleveland, haven’t been released but Stein and ESPN’s Chris Haynes are reporting that the Nuggets’ Kenneth Faried, Wilson Chandler and Emmanuel Mudiay are all available.

Talks are reportedly on-going and although a deal wasn’t able to get done prior to the draft it certainly seems like a deal for George is coming sooner rather than later.