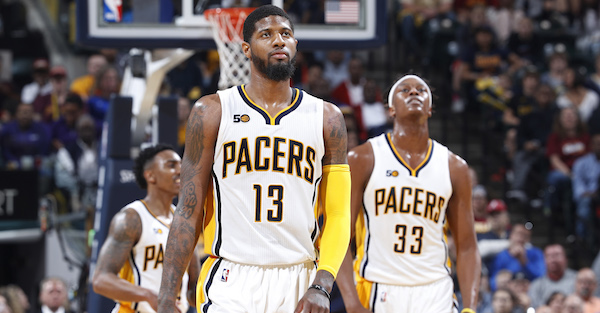 Joe Robbins/Getty Images
INDIANAPOLIS, IN - APRIL 23: Paul George #13 and Myles Turner #33 of the Indiana Pacers react in the second half of Game Four of the Eastern Conference Quarterfinals during the 2017 NBA Playoffs against the Cleveland Cavaliers at Bankers Life Fieldhouse on April 23, 2017 in Indianapolis, Indiana. The Cavaliers defeated the Pacers 106-102 to sweep the series 4-0. NOTE TO USER: User expressly acknowledges and agrees that, by downloading and or using the photograph, User is consenting to the terms and conditions of the Getty Images License Agreement. (Photo by Joe Robbins/Getty Images)

The Indiana Pacers are inextricably tied to the fate of All-Star forward Paul George but, in the very near future, that might not be the case anymore. Adrian Wojnarowski of The Vertical brings word that George has informed his current team that he will not be re-signing after the 2017-2018 NBA season. Beyond that, George has reportedly made it clear that the Los Angeles Lakers are his preferred destination in the future.

This does not come as a complete shock in that rumblings have emerged in the past that George could be looking to head to the Lakers by whatever means necessary. Still, this is the clearest reporting to that end at this point and it puts the Pacers in a very difficult position.

On one hand, it makes Indiana’s choice easy in that the organization seemingly must trade George to recoup any sort of value. On the flip side, the rest of the NBA now knows the predicament that the Pacers are in, which could lessen the market value for the talented forward.

As for the Lakers, this seems to be the best case scenario in that George could be acquired in free agency, leaving Los Angeles in a position to grab him without trading assets. Still, it should be noted that there are some salary cap considerations to navigate.

LAL would need to move one of their large contracts (Deng, Mozgov, Clarkson) or not bring back Julius Randle to create the room.

At this point, Paul George does not appear to be long for Indiana and the Lakers are in the driver’s seat. However, the next move for both franchises will be quite intriguing.