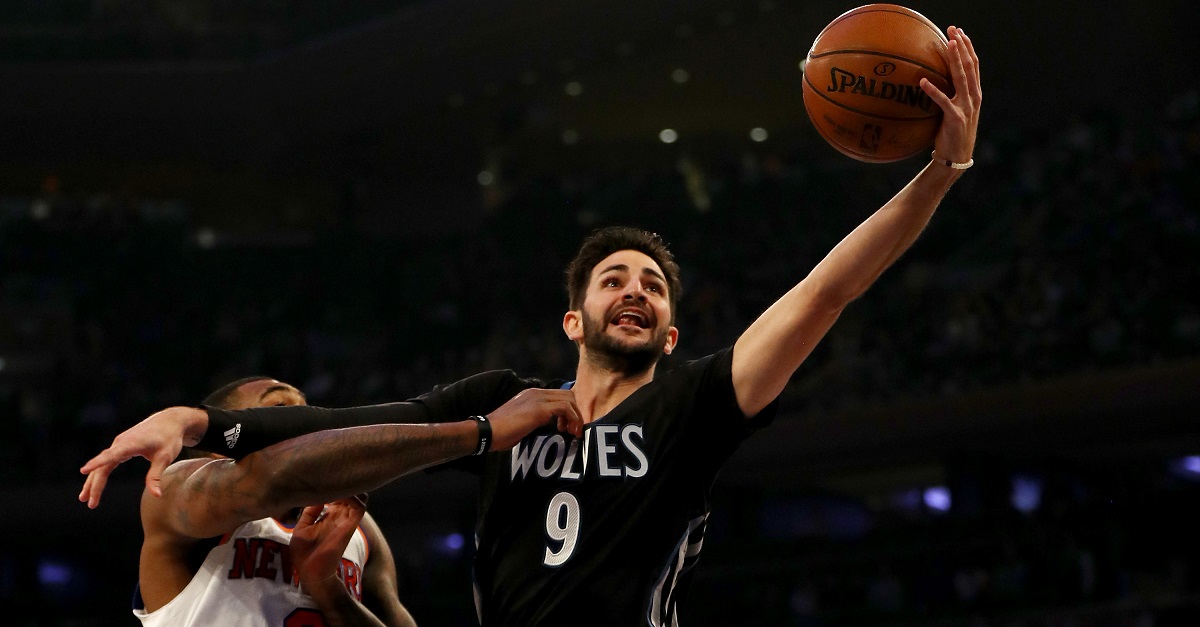 Elsa/Getty Images
NEW YORK, NY - DECEMBER 02: Ricky Rubio #9 of the Minnesota Timberwolves heads for the net as Kyle O'Quinn #9 of the New York Knicks defends at Madison Square Garden on December 2, 2016 in New York City. NOTE TO USER: User expressly acknowledges and agrees that, by downloading and or using this Photograph, user is consenting to the terms and conditions of the Getty Images License Agreement (Photo by Elsa/Getty Images)

I'm told Minnesota will be get a 2018 first-round pound to trade Ricky Rubio into Utah cap space. @tribjazz first to report deal happening

The Timberwolves will trade Rubio to Utah, likely in exchange for the rights to Oklahoma City’s 2018 first-round pick. With the move, it is unlikely that Utah will retain point guard George Hill.

According to Shams Charania of Yahoo! Sports, the Minnesota Timberwolves and Utah Jazz are in discussions on a trade that would send veteran point guard Ricky Rubio to Utah.

Minnesota and Utah are in active discussions on a deal to send guard Ricky Rubio to the Jazz, league sources tell The Vertical.

The move is likely to clear cap room so Minnesota can go after another free agent, such as Toronto’s Kyle Lowry or Indiana’s Jeff Teague.

Updated intel on Minnesota front: expectation from folks who would know is that Jeff Teague is heavy, heavy favorite with T-Wolves.

If moved, it would finally be the end of what has been about five years of Ricky Rubio being in trade rumors. The Spanish hot shot was drafted fifth back in the 2009 NBA Draft, and his career has yet to evolve into that of a superstar that some expected. Instead, Rubio has become a solid starting point guard that still has trouble scoring, yet can distribute and defend at an above average level.

Minnesota is already a big winner in the NBA over the past week, as they acquired Jimmy Butler in a trade with Chicago on an absolute bargain deal. The Timberwolves may finally be a force in the west next season with a core of Butler, Karl-Anthony Towns, and Andrew Wiggins.