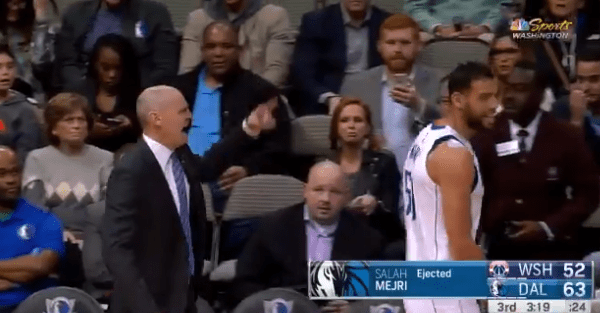 Dallas Mavericks center Salah Mejri was ejected from Monday’s night game against the Washington Wizards after picking up two technical fouls for arguing with the officials.

Mejri was visibly fired up after his ejection and appeared to be taking his time leaving the court area before his head coach had a very NSFW message for him:

Rick Carlisle to Salah Mejri after getting ejected: "You have two f–king points, get the f–k outta here." 😂 *NSFW* pic.twitter.com/6UyhpcIrtM

The incident may have been funny to those watching the game and those that saw the clip on social media, but at least one former player wasn’t amused by Carlisle’s message:

That’s not cool for a coach to say something like that. That’s not leadership https://t.co/WNEMMd9PUN

The Mavericks managed just fine without Mejri as they went on to cruise to a 98-75 win over the Wizards.